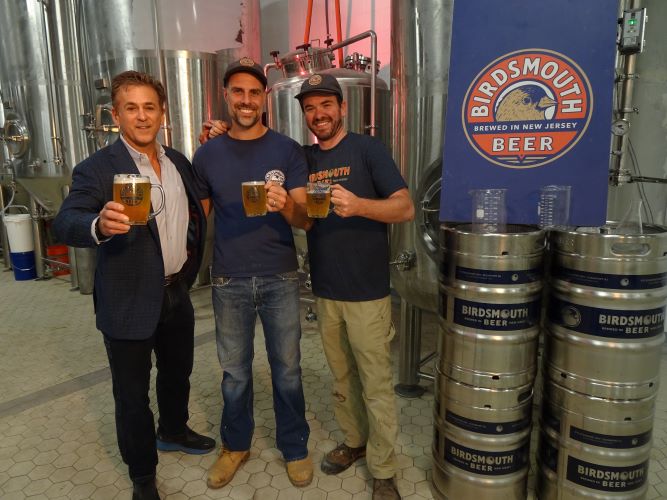 The Birdsmouth Beer team, which includes Pierson Commercial’s Gary Krauss and company founders Rocco Laginestra and Andy Gioia, is marking the craft-lager brewer’s official opening this Saturday at the Commissary at Fort Monmouth.

Pierson Commercial recently announced that its brewery client, Birdsmouth Beer, is officially opening its doors to the public, occupying a section of the former Fort Monmouth military base in Oceanport.

Located at 675 Oceanport Way, the company worked with Krauss to negotiate a 12,080-square-foot lease within the 53,000-square-foot multipurpose food-and-beverage destination.

“The genesis of the deal was one of those ‘right place, right time’ moments,” Krauss stated. “We were in CEO Steven Denholtz’s office when he expressed a high level of interest in bringing in a brewery. Fortunately, I was able to share that I knew just the right guys to make that happen.”

According to Krauss, master brewer Gioia and Laginestra had been searching for the right location for their beer production facility and tasting-room startup.

“They had been looking for the most suitable spot within the Jersey Shore submarket, where they could achieve that local feel and be in close and easy proximity to the major arteries of distribution throughout the state,” Krauss added. “The Commissary checked all of their boxes as an exciting new development in an up-and-coming part of affluent Monmouth County. It is close to the beach and offers almost-immediate connectivity to the Garden State Parkway as well as Routes 18, 35 and 36.”

The Fort Monmouth property dates back to 1917, when it was developed by the U.S. Army Signal Corps. In its heyday, the facility was home to numerous innovations, including the first radar system to bounce signals off the moon.

“Our goal at Fort Monmouth is to create a hub where businesses of all types can thrive and power the resurgence of this important piece of New Jersey’s history,” Kristine Hurlbut, senior vice president of leasing at Denholtz Properties, stated. “Birdsmouth Beer shares our vision for the future of Fort Monmouth and we look forward to celebrating their success.”

Birdsmouth Beer, which is focusing its production on lager beers — the most popular variety nationwide — is marketing its product line to retailers and restaurants and bars.

“I have to admit,” Krauss added, “the initial research into the design elements of a brewery was one of the most enlightening workdays ever. I got to tour brewery operations and sip a pale ale while making notes on tenant fit-out specifications.”