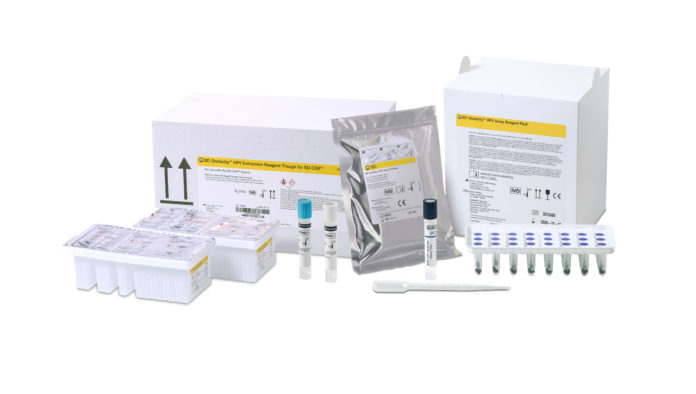 Each year in the U.S., about 14,000 new cases of cervical cancer are diagnosed, according to figures from the Centers for Disease Control and Prevention.

Certain types of human papillomavirus, or HPV, are the main cause of cervical cancer, and all women are at risk — meaning HPV tests are the first step in screening for the disease, which takes about 4,100 lives annually.

When cervical cancer is found early, it is highly treatable and associated with long survival and good quality of life.

While the pap smear that was developed earlier in the 1900s combated a lot of cervical cancer deaths, HPV testing is now viewed as the more reliable test that should be a part of cervical cancer screening for every woman who walks into their doctor’s office.

“An HPV test is a critical part of cervical cancer screening, as it measures the risk for that pre cancer,” Molly Broache, associate director with BD, also known as Becton, Dickinson and Co., said. “We are not trying to find cervical cancer with an HPV test or a pap, we are trying to find precancer, because, when you find precancer, it is relatively easy to treat, and you will never get to the point of having cancer.”

Broache said that, when a woman goes into her OB/GYN office, she is essentially getting screened with whatever the doctor has available. She believes there are a lot of women who do not feel empowered to ask for the right testing. BD wants to inform them so they can speak up about that.

That’s why when, in 2020, BD received approval for a pre-market supplement from the U.S. Food and Drug Administration for an expanded version of its BD Onclarity HPV Assay, the Franklin Lakes-based firm knew it would be a game-changer.

“Right now, there are 14 high-risk HPV genotypes, and each one of these types are associated with a different level of risk of progression to cervical precancer and cancer,” Broache said.

“What’s nice about BD Onclarity HPV Assay is that it enables doctors to measure patient risk of the top three HPV genotypes (HPV 16, 31 and 18) that are well known to cause cervical cancer and precancer.”

She added that it is also the only FDA-approved HPV test that individually identifies HPV 31, which poses a higher risk for cervical precancer as compared to HPV 18.

The BD Onclarity HPV Assay with extended genotyping allows for a more precise, accurate way to measure a woman’s risk for developing cervical precancer and cancer compared to an assay with partial genotyping — all other FDA-approved HPV assays provide only partial genotyping, and they only report types 16 and 18 individually; other assays report the rest of the high-risk HPV genotypes in a single, pooled result, which may mask the true risk of CIN3+ disease due to HPV 31 (abnormality in the cells that line the cervix).

The American Cancer Society recommends starting cervical cancer screening at age 25 with primary HPV screening. Women who are tested and no not have any evidence of HPV infection are shown to have a very small chance of developing cervical cancer within five years.

“Doing the HPV test has a much higher sensitivity or ability to detect disease than a pap, and it has been documented that women would have to get three consecutive years of pap smear testing to reach the sensitivity of one HPV test,” Broache noted.

Of course, screening is not perfect and will not detect all cases. However, there is this great need to have this testing, and the most effective way to screen is with this marker of HPV.

“This is a highly sensitive screen for cervical cancer, and it’s cost-effective. Women are happy to not have to go through getting cervical cancer screening every year, and HPV testing is just a better test to get first because it’s going to detect more disease,” Broache said.

She added that, with the introduction of the HPV vaccine, people will slowly start to realize that if it’s important enough to vaccinate against, we should probably be testing for it, as well.

The HPV vaccine is recommended for boys and girls, ages 11 and 12. For Broache she said it’s pretty remarkable that there is a vaccine that is designed to prevent cancer.

“Unfortunately, I would say the population, about 35 years old and above, really never had a chance to even get the first-generation vaccine, so we still have a large population of women and the screening population that are at risk for all of these HPV genotypes, and the vaccine is not going to take away any infection you currently have, it will just prevent infections going forward,” Broache added.

As more women who have received the HPV vaccine enter the screening population, the prevalence of HPV 16 and 18 has declined, with other high-risk genotypes, like HPV 31, are becoming more prevalent.

HPV 31 is higher risk for progression to cervical precancer and should be managed similarly. And that’s why BD’s Onclarity HPV Assay is worth talking about — it is the only FDA approved assay with extended genotyping that can individually identify high-risk HPV genotypes, including HPV 31.

Residents concerned about COVID cases in schools — despite their low...