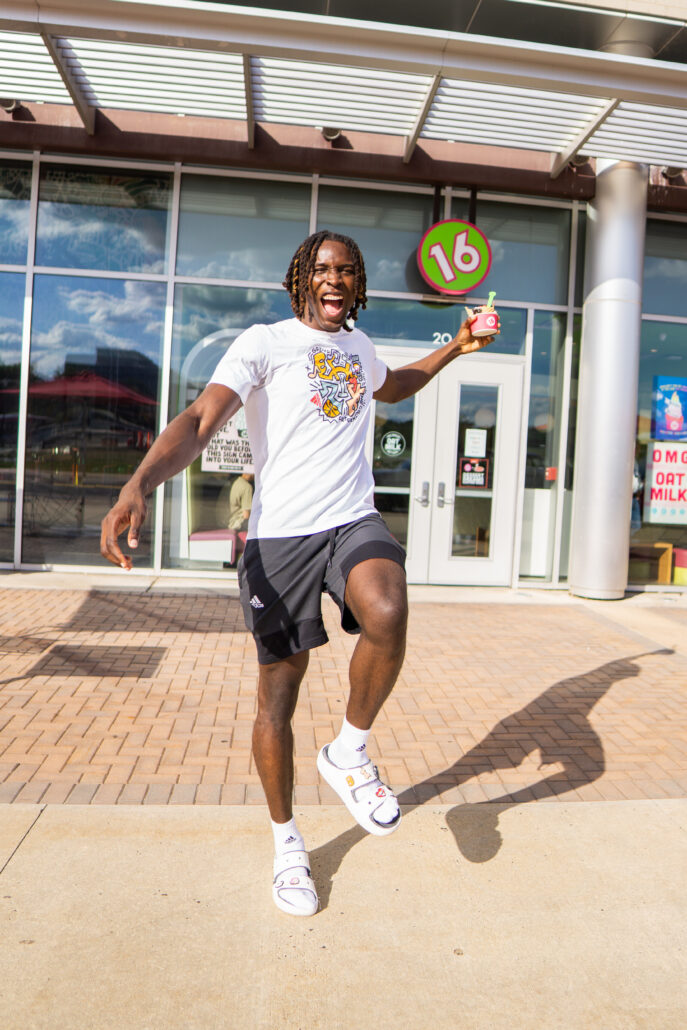 The NCAA “Dunk King” and star center on the Rutgers University men’s basketball team, Cliff Omoruyi, partnered with 16 Handles, the No. 1 soft serve & dessert brand in New York City, according to a Thursday announcement from IPZ, an alliance with Warren-based Zito Partners, which represents many clients in sports, media and entertainment.

“We’re proud to make Cliff 16 Handles’ first NCAA athlete partner,” Neil Hershman, CEO of 16 Handles, said. “We admire his success on and off the court with his leadership, academic discipline and community involvement. This partnership is especially sweet, given Cliff is the star center at Rutgers University — the home to 16 Handles’ first on-campus store location, and because it helps us to support community programs via the Salvation Army.”

Omoruyi, a rising junior at Rutgers University, led NCAA Division 1 in dunks last season and is set to be the focal point of the Rutgers offense this season. He continues to have a strong impact within the Rutgers and New Jersey communities both on and off the court, and this partnership will help the big man promote both.

This summer, Omoruyi volunteered as a counselor at the “Books & Basketball” program at the Salvation Army’s Newark West Side gym. 16 Handles said it will make a contribution to the Salvation Army as part of the relationship.

Additionally, “Big Cliff” will promote the 16 Handles brand on social media and will make an appearance at the 16 Handles location on the RU campus this semester, where he will share his signature sundae and interact with his fans as part of a semester tip-off event. He will also debut his signature “Big Cliff Sundae” at the Rutgers location.

“I smile every time I see a Rutgers student on campus enjoying a 16 Handles sundae,” Omoruyi said. “Now, I’ll smile a little brighter.”

Omoruyi has spent this week in Minneapolis at Big Ten Media Day, where he has been getting lots of attention on the national level. He was recently selected to the preseason All-Big Ten Team along with Purdue center Zach Edey, who called Cliff “a guy you have to keep an eye on at all times.”

“I think he’s going to be one of the best big guys in the country,” Rutgers head coach Steve Pikiell said. Pikiell told reporters that Omoruyi has even improved his three-point shooting, which Indiana center Trayce Jackson-Davis could only describe as “scary.”

We will get our first look at Omoruyi this season on Oct. 30, when Rutgers takes on Fairfield University in the Team LeGrand Exhibition Game. Rutgers will officially begin its season on Nov. 7 against Columbia University.