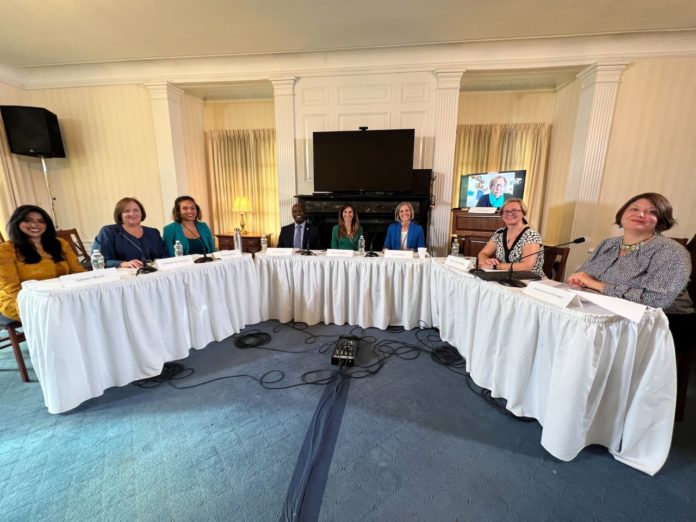 Mona Lena Krook, the chair of the Women & Politics Ph.D. Program at Rutgers University, said the ramifications of sexual harassment and violence against women go much deeper than many realize.

Such actions, she said, can go against the core of democracy when they happen in political circles.

“If you have violence against campaign volunteers and politically active young women, and she experiences sexual violence and leaves politics, that leaves us much poorer in our democracy.”

The roundtable event, “Creating Safe Workplaces in NJ Politics,” featured a diverse panel of experts on harassment, sexual assault and misogyny in New Jersey politics. It was sponsored by YWCA Northern New Jersey and the Center for American Women and Politics.

The conversation highlighted YWCANNJ’s recently unveiled workplace training video for political campaigns on creating a safer environment for staffers, expert advice on identifying sexual harassment in the workplace and what legal rights and resources victims have when experiencing harassment.

Helen Archontou, the CEO of YWCANNJ, said organizing conversations such as this are key to creating culture change.

Former state Sen. Loretta Weinberg, who championed new regulations for those who serve on campaigns while she was in office, said not enough has been done since she left office earlier this year.

“We left undone the issue dealing with campaigns,” she said. “That was to set up the Election Law Enforcement Commission, since it is a division that already regulates the financial aspect and disclosure aspects of campaigns.

“We felt that the Election Law Enforcement Commission would be the best semiautonomous group to deal with issues (since) the political parties themselves have too much vested interest in whoever their candidates are to set them up as arbitrators.

Here are some of their thoughts:

Gaskins: “I can tell you that, whether it’s sexual violence, regular violence, harassment, bullying, abuse or intimidation, there are plenty of political staffers who will put up with it because they don’t what to lose their jobs. They will suffer in silence, they will take those experiences with them, become jaded and leave politics, or will basically fight to find the ‘good’ places and the good people to work for. They will keep track and they will share stories and say avoid this person, don’t talk to this person, especially don’t be at a bar with this person. It has to be a constant and known culture that these are unacceptable behaviors.”

Sinzdak: “Change is not just going to happen. Putting sunlight on the problem and keeping the sunlight on the problem will. And I think that’s what everyone in this roundtable is doing. And what all of you who are watching this can do is play a role in raising awareness, which is what’s going to be crucial to sort of long-term systemic and institutional change.”

Masih: “I would urge you to sit back and look at the institutions around us; we see the same faces, the same archetype, the same kind of person in power — that’s by design. So, disrupt it. Get involved in politics; you don’t have the be the lawmaker making the decisions or in the foreground, you can be in the background and in the room contributing. Diversifying the pool of people we see in positions of power — that’s what’s going to lead to overall change.”

Scheurer Branigan: “We know that, with the most recent iteration of the #MeToo movement, there was strength in the vocalization of the issue — why can’t we fix this? why are we still dealing with this? — and that led to many great efforts in the state of New Jersey.

“The most important training is to have live, interactive training where you can have a dialog over these very difficult areas to navigate. It’s not checking a box or sitting in front of a computer so the employer can check a box and say they did the training. It’s having a dialogue and people asking questions. And, so far, many of the organizations that do training don’t do that kind of training or think that addressing this issue may create an issue that may be bubbling under the surface.”

Mapp: “Male leaders must lead by example. We must set clear boundaries in the workplace and have zero tolerance for sexual harassment. We must also believe in and support women and any victims when they come forward. In the city of Plainfield, not only do we have annual training around sexual harassment, but we’re constantly updating our training and expanding our definition of sexual harassment.”

“Our mission is to create informed citizens and to make these resources available at no cost to anybody. We have, you know, our tagline, our motto is that informed citizens are better citizens. We’re happy to fund films like ‘Creating Safe Workplaces in NJ Politics’ and training videos like this, that allow us to spread the word to the public for free. So, you know, how can we move the needle forward? Look, come to places like us, we have funding grants every year.”