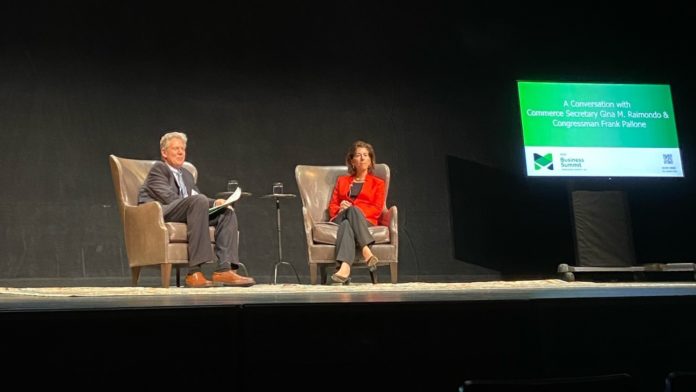 U.S. Secretary of Commerce Gina Raimondo played a key role in the passing of the $52.7 million CHIPS Act this summer, a bill aimed at bringing more manufacturing — especially in the semiconductor industry — back to the U.S.

And, while she said the bill could have a legacy of jobs and economic development for decades to come, Raimondo told the audience at the 2022 Middlesex County Business Summit that her time as governor of Rhode Island during the opening months of the pandemic showed her how important the bill is today.

Raimondo called the issue of manufacturing semiconductor chips in the U.S. a matter of national security.

“I was the governor of Rhode Island during COVID, and I had a lot of sleepless and scary nights, calling to China, to Vietnam, trying to get my hands on ventilators — it was not a good place to be,” she said. “It’s not a good feeling when you need something, a life-saving device like a ventilator, and you’re at the mercy of other countries.”

Raimondo said she values the global economy but said the U.S. needs to ensure its positions in it.

“Trade is important,” she said. “We don’t want to make everything in America. But certain things, like pharmaceuticals, semiconductors, life-saving devices, we have to make enough in America so that we have them when we need them.

“To me, this is as much about our national security, protecting the people of America, as it is a better economic security.”

Raimondo spoke candidly during a 25-minute conversation with U.S. Rep. Frank Pallone (D-6th Dist.). Pallone, as chair of the House Energy and Commerce Committee, also played a huge role in the passing of the act.

“It is a fact (that the bill) would not have passed without him,” Raimondo told the audience. “He played a huge role.”

The two discussed the impact the CHIPS Act could have moving forward, saying it could create 250,000 jobs in the country — reversing a manufacturing decline while strengthening the supply-chain issues the pandemic exposed.

“We all know the story of American manufacturing,” Raimondo said. “Once upon a time, many Americans had jobs and manufacturing companies … and we just watched all those jobs go to Asia in search for cheap labor.”

“We don’t make them in America, which is a scary thing if you think about it,” she said. “So, the opportunity here is to make chips in America, creating jobs in the process. And it’s not just the jobs in the chip companies, it’s all the startups that will come around it, the supply chain, etc.

“I think when history is written 20, 30, 40, 50 years from now, it’ll look back on this bill as a turning point in a real rejuvenation in American manufacturing.”

Pallone and Raimondo both stressed the national security aspect of rebuilding the sector.

“We are now vulnerable, which is why this was such important legislation,” she said.

Raimondo said the pharmaceutical industry was one of the biggest supporters of the legislation.

“When we were working on the CHIPS legislation, I received a lot of phone calls from pharmaceutical companies and life sciences companies urging passage, because all of their new innovation requires semiconductors,” she said. “All of the data analytics that they’re doing, the new kinds of synthetic biology, is all underpinned with sophisticated artificial intelligence, which requires semiconductors.

“So, for their own innovation — which, of course, creates jobs — they said this was a critical piece of legislation.”

But Pallone and Raimondo both stressed the CHIPS Act — which includes grants and tax breaks — should not be seen as a government handout, or worse, government interference in the market economy.

“You have to be practical,” Raimondo said. “Truthfully, I don’t love providing tax breaks to big companies. If you didn’t have to do it, you wouldn’t want to do it.”

But Raimondo said she feels incentives are the only way the U.S. can compete with those overseas markets.

Raimondo said the need to have semiconductor chips available for all sorts of products — from military and satellite equipment to medical devices to everyday needs, such as refrigerators and cars — is too great to ignore.

“Those are the chips we need … and we buy all of them from Taiwan,” she said. “It’s irresponsible for us to know that be in position to fix it, protect the American people, and not do something about it.”

Raimondo said the bills includes provisions to ensure the money will, in fact, go to doing something about it.

NJMEP announces finalists for 2021 ‘Made in N.J.’ Manufacturing Day awards