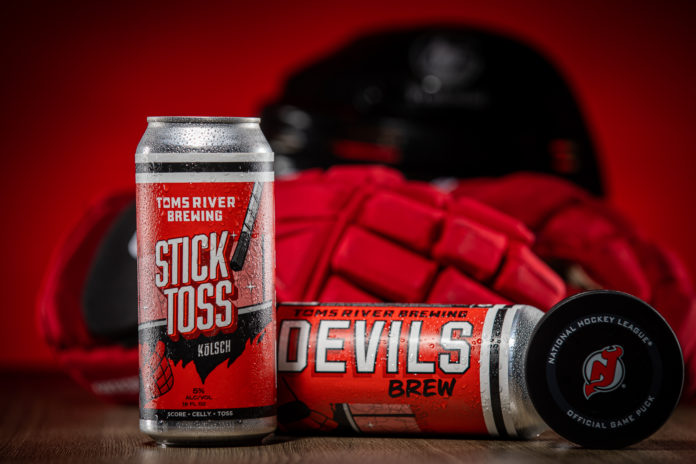 The first locally brewed New Jersey Devils-themed beer is on ice and ready for availability at the team’s home opener Saturday at Prudential Center.

The Devils teamed up with Toms River Brewing for a three-year partnership, which includes a specialty beer that celebrates New Jersey, the Devils and their fans.

Titled “Stick Toss,” the beer is described as a “delicious, easy-drinking, Kölsch-style ale that is the perfect companion while enjoying the Devils in action, whether at Prudential Center, at home or out with family and friends.”

Devils star Jack Hughes made highlight reels around the NHL after last season’s home opener, when he scored the game-winning goal in overtime and tossed his stick over the rink glass to the Prudential Center fans in celebration.

Fans will have the opportunity to purchase the beer at local New Jersey liquor stores, with exact locations to be released in the coming weeks.

“We’re beyond excited to be partnering with the New Jersey Devils,” Toms River Brewing owners James Mulligan and Augustin Isernia said. “We foresee a very bright future ahead between our organizations. It is a unique opportunity to give back to the fans, and we’re very honored to have both of our teams working together.”

In celebration of the partnership, the Devils also hosted a sweepstakes that allowed one grand prize winner to tour the brewery with Devils alum Jim Dowd, a member of the 1995 championship team and Ocean County native, who joined the winner as the first fan to taste the beer prior to launch.

The Devils will host two viewing parties at the brewery during the 2022-23 regular season, where fans will have the opportunity to visit the tap room to watch a Devils game and interact with a Devils alum. Viewing party dates and details will be announced in the coming weeks.

“We’re honored to partner with Toms River Brewing to launch this unique New Jersey-brewed, Devils-themed beer,” Adam Cross, senior vice president, corporate partnerships sales, for the Devils, said. “We’re excited to watch our fans toast throughout our 40th season with a beer that celebrates our history, our team and our state.

Murphy vetoes bill that would have reimbursed N.J. restaurateurs for summer...