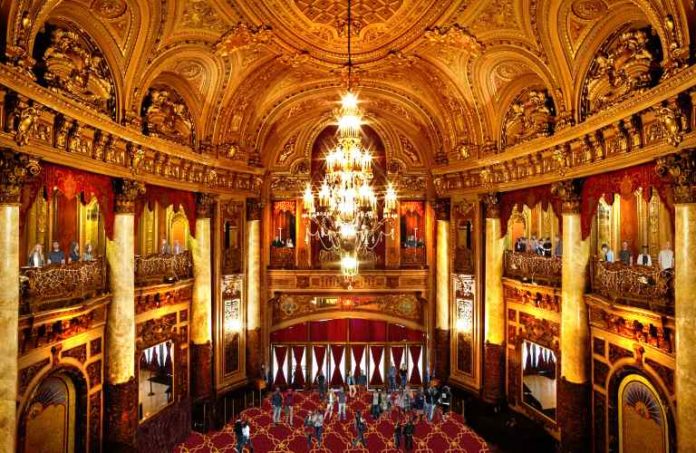 Loew’s Theatre in Jersey City on Wednesday was named the first recipient of an award under the Historic Property Reinvestment Program.

The project, approved by the New Jersey Economic Development Authority board, is expected to result in the complete rehabilitation of the historic theater for use as a live performance, movie and entertainment venue. The board authorized the award of $42.27 million in tax credits, representing 45% of the eligible cost under the project, which has an estimated total cost of $110 million.

Created under the New Jersey Economic Recovery Act of 2020, the HPRP’s main focus is historic preservation as a component of community development, aiming to attract long-term private investment into New Jersey while preserving historic properties throughout the state.

As planned, the proposed Loew’s Theatre Rehabilitation Project will be a state‐of‐the‐art, 21st-century event space that will enhance the cultural, artistic and community vibrancy of the Journal Square district, fostering economic prosperity in the neighborhood. Upon completion, the theater is anticipated to host around 150 events a year, in addition to several community programming events.

“By supporting projects like the revitalization of Loew’s Theatre into vibrant community assets, we are ensuring the long-term growth of local economies while preserving the history of iconic properties within New Jersey’s neighborhoods,” Gov. Phil Murphy said.

The HPRP is designed to work in conjunction with the Federal Historic Tax Credit Program to encourage and bolster long-term private investments focused on the rehabilitation of existing identified historic structures throughout New Jersey.

“The long-awaited revitalization of Loew’s Theatre will be a tremendous economic driver that will lead to upholding the historic integrity of the property while offering new generations of New Jerseyans access to the performing arts,” NJEDA CEO Tim Sullivan stated.

Jersey City Mayor Steven Fulop noted that the rehabilitation work to Loew’s Theatre includes the building’s exterior, all public spaces, stage and support spaces, and modifications and upgrades to the mechanical, electrical and plumbing systems.

In addition, a new three-bay loading dock will be added at the rear of the theater, and a café is to be added along the south alley. Significant finishes at the interior and exterior will be rehabilitated or replicated where they were damaged beyond repair. All work is being reviewed by the Jersey City Historic Preservation Commission, the New Jersey Historic Preservation Office and the National Park Service, and will follow the secretary of the interior’s Standards for Rehabilitation of Historic Properties.

“The Loew’s Theatre has stood for nearly 100 years as a major focal point here in Hudson County, and its transformation into an entertainment hub is a pivotal point to the continuing renaissance underway in Jersey City and our efforts to revive Journal Square. We are very grateful to Gov. Murphy and the NJEDA for their commitment to seeing historic properties turned into thriving cultural centers and for recognizing our efforts to restore this critical community asset,” Fulop said.

“The HPRP marks the first time that New Jersey has offered support specifically designed to rehabilitate historic buildings for 21st-century use while ensuring that their historic integrity remains in place, so this is a very exciting day for Historic Preservation in the state,” NJEDA Director of Historic Preservation Aidita Milsted said. “We have seen a great response to this program and look forward to bringing additional projects from Community Development before the NJEDA board in the coming months.”

Bruck to serve as acting attorney general for remainder of Murphy’s...

Fulop on Stack’s loss to DeGise in fight to become Hudson...