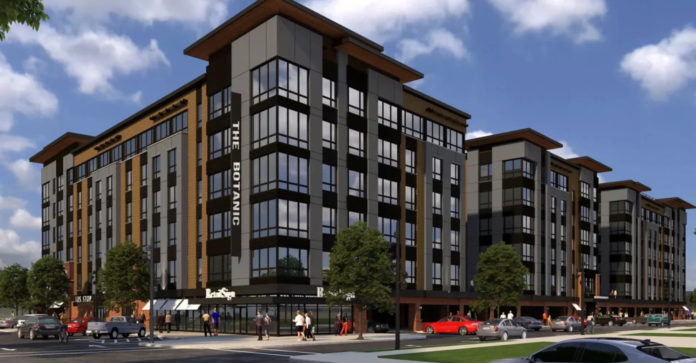 The Botanic, a 242-unit luxury apartment building leasing while completing construction in downtown Carteret, has sold for $87.5 million, according to the borough of Carteret’s Thursday announcement.

“The Botanic is one of our largest and most luxurious mixed-used projects in town, and we are all very happy with the final product,” Carteret Mayor Daniel Reiman said. “Carteret has experienced more than $2 billion in private investment during the past 20 years in addition to $250 million in public improvements. With the marina complete and the ferry project starting construction soon, Living Residential is getting in on the ground floor for what will be an exciting future of development and revitalization.”

Living Residential CEO Gary Kassirer said he was so impressed with the botanical nature of the property’s 30,000 square feet of outdoor space, he was inspired to change building’s name from Washington Lofts to the Botanic. Outdoor amenities include a 15,000-square-foot rooftop terrace, multiple courtyards, gardens, fire pits, planters with river birch trees and atmospheric lighting.

“It’s just a beautiful town with a great, great mayor who has an unbelievable vision,” Kassirer said. “I would say he has the most amazing devotion and dedication to see that vision through. It’s something that’s very inspiring, something I want to be part of, and something that people in the state and the tristate area should take note of because Carteret is becoming the epicenter for the live, work, eat, play lifestyle with a community that is vibrant and most attractive.”

Living Residential intends to fully lease the property during the next six to 12 months and hold it long term.

As for Living Residential’s vision for the Botanic, Alfredo’s Pizzeria, a longtime successful Carteret establishment, will move in November across Washington Avenue from its current location to its new 2,500-square-foot home.

The development company is working with a number of prospects for the other 7,500-square-foot restaurant space, which will include a rooftop dining area with panoramic views of the New York City skyline, Arthur Kill and the Watchung Mountains. The prospective restaurateur will be someone who is willing to come alongside the long-term vision for the borough, Kassirer said.