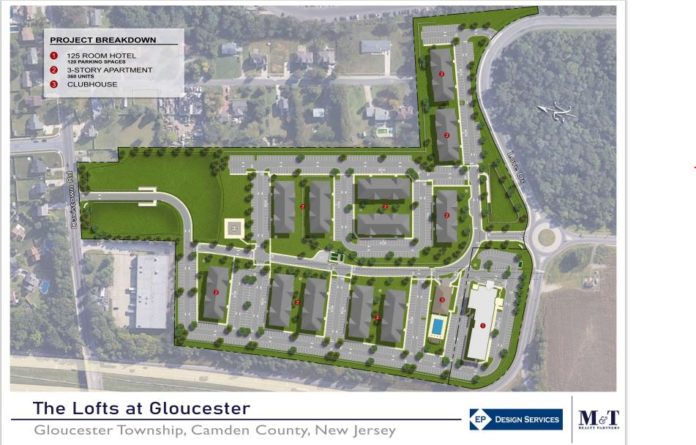 M&T Realty, an affiliate of Piscataway-based Edgewood Properties, announced it is breaking ground Wednesday on its newest property in Gloucester Township — the Lofts at Gloucester.

Situated on a 28-acre site at 752 Davistown Road, the community will feature a three-story apartment building with 144 one-bedroom and 216 two-bedroom units, a 125-room hotel with 120 parking spaces and a restaurant, and a 5,000-square-foot clubhouse with an outdoor pool, cabana, business center and fitness center.

“It’s an exciting and great project for the county, township and region,” Jack Morris, Edgewood Properties’ CEO, told ROI-NJ on Tuesday. “This will be another spectacular residential project from M&T, a joint venture of Edgewood Properties, and a great addition in the growing Gloucester market.”

And, for an area that has been designated as one of the fastest-growing municipalities in southern New Jersey, it will offer affordable housing.

“We think this is another project that will help people not only in Camden County, but surrounding ones, too, like Atlantic and Gloucester. It won’t be like living in Philadelphia or other areas where the rents are high, and people can’t afford to live and work. We believe that this will be a great product for the market,” Morris said.

A substantial economic investment in the area, the Lofts at Gloucester community is one that Morris resulted from his faith in the area, which he said he has had for a while, thanks to what Cooper University Health Care and the Norcross family have done in Camden.

“Being the owners of the Garden State racetrack property — one of the largest redevelopment projects with mixed-use done in the area in the last decade — is testament that we believed in Camden County for a long time,” he said.

As part of the Lofts at Gloucester project, Davistown Road is being widened, and sewer improvements are being made to accommodate the site. In addition, Edgewood provided extensive environmental remediation on municipal-owned properties that were part of the parcel.

Additionally, the property is within walking distance to Camden County College and the Gloucester Premium Outlets — part of the reason there is no retail at the community. Morris did say, however, that the Gloucester development is part of a two-part project that he hopes to break ground on some time in 2023, which will contain a retail component.

“This community will serve a lot of a lot of purposes. And, while it doesn’t have the typical retail component built in, the shops are directly across the street — providing a lot of convenience for our residents,” Morris said. “Part two of this project, only about two miles away, will offer affordable housing with a percentage of those housing units set aside for veterans later in 2023 as well as a retail component.”

Edgewood and Morris are very committed to veterans, as all Edgewood Property communities offer preference to veterans and establish many incentives for them.