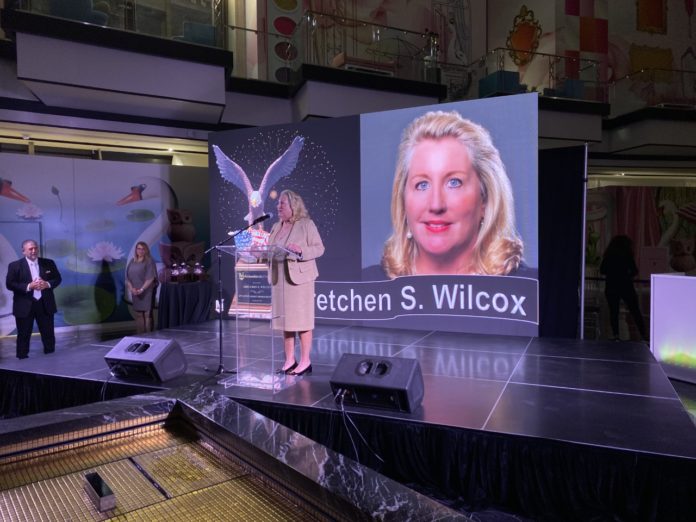 It was easy to make a joke about giving someone the bird — that’s what happens when the Legacy Award statue that is handed out is topped with a large eagle.

But, on a night when hall-of-fame-type leaders were honored by the Meadowlands Chamber, praised for their successes in the business world and as people of character and integrity, each opted to give something else: thanks to all of those who helped them reach the stage.

Family, friends, colleagues and mentors were all acknowledged and asked to stand before a crowd of more than 300 that filled the Avenue wing of American Dream in East Rutherford.

The fourth honoree, Dr. Nizar Kifaieh (CEO of Hudson Regional Hospital), was not able to attend.

Sparta, who has been leading the development of the soon-to-be-opened Helena Theurer Pavilion, a transformative $750 million project at HUMC, said his honor should be a team award.

“While I’m really humbled to be recognized by the chamber, we all know that no one accomplishes anything alone,” he said. “I’m incredibly blessed … to work every day with a team that really cares.”

He gave recognition to the Hackensack leadership and, most of all, his wife, Colleen.

“We all know that none of those would do what we do without a great partner,” he said.

Wilcox, who founded the first woman-owned and -led commercial real estate mortgage financing firm in 1994 — one that has financed approximately $6 billion worth of projects representing nearly 60 million square feet — said she always has viewed her co-workers as family.

“I’d like to dedicate this award to the employees of G.S. Wilcox & Co. that we actually call the Wilcox team,” she said. “They’re amazing. And they really are family.

“We’ve all worked together for decades — so I’m going to dedicate the bird to you guys.”

Reiner, a partner in a firm that has led much of the transformation of Hackensack, thanked the city’s leadership for their efforts in so many projects.

He thanked his wife, Marna, and their three kids. And he thanked his colleagues at the firm, particularly Kurt Vierheilig, Pradeep Kapoor and Charles Sarlo.

“I’ve been able to achieve so many things because of the great people that I get to work with,” he said.

But he said his biggest praise was for the company’s founder and president, Lloyd Rosenberg.

“Our firm’s legacy has been built on the work that you’ve done over the last 30 years,” he said. “I can’t say enough things about how incredible you have been for me, as a person and as an individual and as a professional — and I would not be in the position that I’m in today without your support and guidance.”

Kifaieh, while being honored by Ron Simoncini, was lauded for leading a transformation of Hudson Regional Hospital, one that was struggling upon his arrival in February 2018.

Jim Kirkos, the longtime CEO of the Meadowlands Chamber, said the honorees represent the spirit of success in the area.

“When we choose to honor folks, we’re pretty selective,” he said. “We don’t just pick a name out of hat. Someone has to be worthy: being a great human being and being great to the region.”

Daniel Baer, the chair of the Meadowlands Chamber, said the 48th version of the annual event represents a new beginning. He thanked the crowd for its support of the organization.

“We recognize it’s been very difficult times over the last couple of years,” he said. “So, the chamber took the steps this year to reinvent itself, to establish another set of goals and objectives and a new roadmap for the chamber to really face the new reality and understand what we’re all up against.

“Thank you so much for all of you who are involved in developing those goals, the vision and the steps it’s going to take to continue to make this chamber the best chamber in the country.”