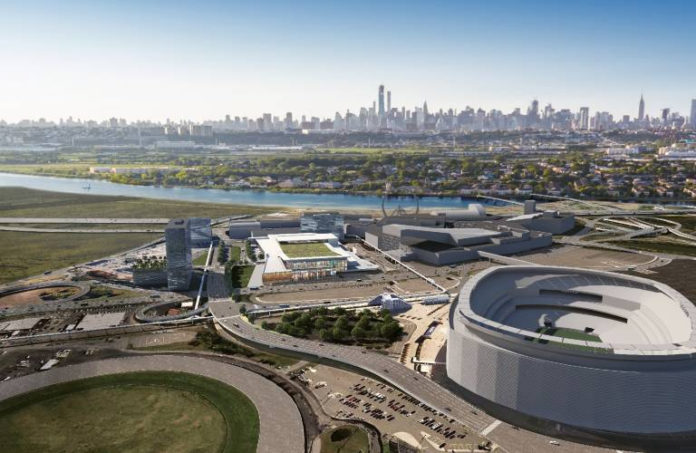 As he stood before more than 325 guests Thursday night at the Legacy Gala, all of which were elegantly seated on the Avenue at American Dream, longtime Meadowlands Chamber CEO Jim Kirkos looked back and forward.

“I’m on the job 20 years in June — and, for 17 of those years, we were advocating for this facility to be built,” he said. “Sometimes, things take a really long time.

“But American Dream is a game-changer for all of North Jersey, for lots of small businesses, for the hotel community that makes us a destination.”

It’s a destination that proved on this night that its upscale wing is more than capable of hosting gala-level events.

With American Dream finally up and going, Kirkos is turning his attention to how the entire complex can be bigger and better.

Kirkos reiterated his long-stated plan to replace the no-longer-needed arena with a new convention center, giving the Meadowlands a key third anchor to go with American Dream and MetLife Stadium.

“(A convention center) will continue to drive the economics of this region forward,” he said. “It will be a game-changer for American Dream, for the stadium, the racetrack — for the entire North Jersey business community and economy.”

It’s a facility Kirkos hopes can be built in a far shorter time period. Plans for it are already underway.

Considering that the New York City metropolitan area ranks 13th in the country for exhibition and convention space — well behind area leaders such as Orlando, Florida; Dallas; Chicago; and Las Vegas — it easily could handle 2 million more square feet of space, Kirkos has said.

“The next step in the process is to get the state to embrace it,” Kirkos said. “And we are confident they will. In the coming weeks, when we are able to finalize the economic data, we are confident that everyone will see that a multiuse convention center here will help drive the North Jersey economy.”

More than anything, Kirkos said there already is proof of concept on the idea.

“The Sports Complex was a game-changer in the ’70s,” he said. “The track was built, the stadium was built, the arena was built. And this sports complex drove the economy in all of North Jersey for 30 years.

“We think American Dream and the convention center, alongside the stadium and the racetrack and other amenities that we will build in the community, could power the economy for the next 30 years. That’s what drives us.”