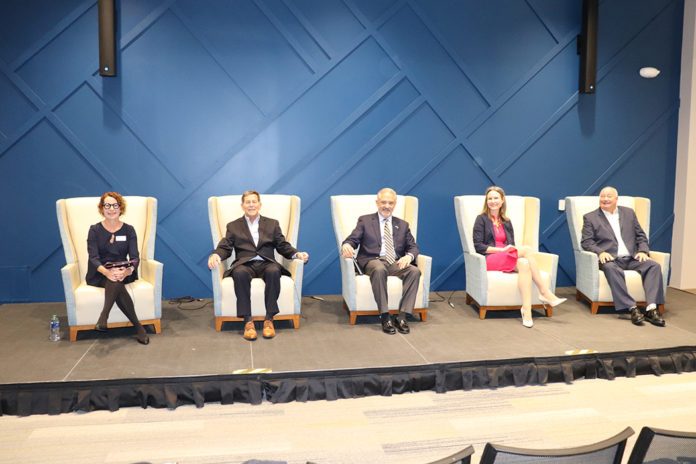 While many southern New Jersey businesses appear to have weathered the COVID-19 pandemic and had a successful summer, a new set of concerns — labor shortages, higher gas prices and inflation — have all emerged to challenge companies in the future, according to a recent panel discussion of regional business leaders at the Jersey Shoreview at Stockton Atlantic City on Oct. 19.

“Visitors are still coming to the Jersey Shore,” Jane Bokunewicz, faculty director of the Lloyd D. Levenson Institute of Gaming, Hospitality and Tourism in Stockton University’s School of Business said. “They may spend a little less when they get here, but they are still looking at it as a good option.”

Bokunewicz moderated the event, which featured four business leaders who recapped the summer season and looked ahead to southern New Jersey’s economic future.

The panelists for the event, which was sponsored by LIGHT, were:

Bokunewicz said that, overall, the panelists reported positive results for the summer. Meetings and convention bookings were up, hotel bookings were up and Canadian tourists returned to the Jersey Shore. But higher gas prices and inflation definitely had some impact on visitation and spending.

Following are some of the questions asked to the panel and selected responses. The full event can be viewed on the LIGHT website here.

Q: How did summer 2022 measure up to preseason predictions? And did it meet, exceed or disappoint expectations?

Jim Ziereis: The volume was definitely there. We were absolutely packed. What we did see, however, was the tightening of the wallet. Inflation was real. The gas prices were real. So the spend was not as much as we anticipated.

Emily Paul: In Cape May County, it was similar. So far, with the data we’ve seen through the end of June, we’ve exceeded expectations. We saw people maybe not staying as long, not spending as much, but the numbers show that we had more people coming down this summer. And then we’re, of course, looking forward to a great fall season.

Anthony Catanoso: We saw the volume. We didn’t see the spend. The interesting part was our more expensive, higher-end attractions, like the helicopter rides, were up. We had a record Fourth of July. So it was very sporadic, but overall down a little bit. But we weren’t disappointed.

Michael Busler: Fortunately, the weather this past summer was excellent. We had great weekends, plenty of sunshine and high temperatures, which drives everybody to the Shore. The small business people that I’ve talked to tell me that their revenue is about 5 to 10% higher in 2022 than it was in 2019. Now, that’s good, except that prices were at least 10% higher in 2022 than back in 2019. So, in real terms, adjusting for inflation, their numbers were not quite as good as they appeared.

Q: Did you exceed the pre-pandemic levels, or were you still falling a little short?

JZ: From the casino side, we met it. From the meetings and convention side, it was an exceptional year. The NAACP Convention took over the whole city and had a really positive impact.

EP: It’s looking like we are going to exceed those numbers and those expectations. People prioritize things, especially when money is tight, and, luckily, that trip to Cape May is still high on the priorities list.

AC: We’re exceeding pre-pandemic, 2019; however, we had to do a price increase because the cost of goods has gone up.

MB: The businesspeople I talked to told me that their costs were rising a lot more than they could pass along to consumers. Some even started charging a fee for using a credit card, looking for ways to try to get their revenue to cover their cost increases. Many people told me that they, too, had trouble getting materials. The restaurants told me they had to take some items off the menu because they simply couldn’t get the food that they needed. So, the inflation problem, I think, was a serious one. Unfortunately, I think it’s going to get a little worse going forward, too.

Q: How about gas prices? Did that have any impact, in anyone’s opinion?

AC: Absolutely. We’re a drive-to market. They were spending it on gas instead of spending on other things.

EP: Most of our people drive to Cape May, as well. We pulled mostly from New York, Pennsylvania, those areas where people can always use a tank of gas to come down and visit us. But, again, maybe people weren’t spending as much, maybe weren’t going out to restaurants as much. They were still coming down.

MB: Tony Marino puts out a report on South Jersey traffic. According to his report, in July and August, the number of cars going through the (Atlantic City Expressway) Toll Plaza at Pleasantville was down. So that leads you to believe that some of these higher gas prices may have had some of an impact on travel, especially with day trippers.

Q: Were staffing levels a concern and the cost of labor?

EP: Earlier this summer, we had two big wins with J-1 workers back this summer, and then there was the teen worker bill, which really helps a lot of the businesses down in Cape May County. But housing is definitely an issue where we didn’t have places for them to stay. So, you know that is going to be a challenge going into future summers where we just don’t have the housing stock.

AC: Housing is a big issue. Before, we didn’t have to worry about it. Now, we do. There’s a big shortage in Atlantic City. We had to get into the business of finding housing for them, which is very difficult.

JZ: There was a shortage of about 600 housekeepers in the entire city collectively, and that prevents you from selling out 100% every night. And you’re doing a lot of overtime at that point, too. So you know it’s very tough on the workforce.

MB: Most of the small business people I talked to told me they never got up the full capacity in terms of staffing. They were paying much more than they expected to pay. And they were hiring younger people.

Q: Looking into the future, are there new challenges or new opportunities to consider?

EP: Last winter’s numbers were really positive in terms of what we can do down the Shore. I think everyone always thought of (the season) in just three months. It’s now looking like seven months, maybe even more than that. We just have a lot more to offer year-round. So, if we can continue that growth and continue that perception that Cape May County is more than just a summertime destination, I think that’s going to be an opportunity for us to grow.

MB: When the increase in the minimum wage was first passed a few years ago, I was very concerned that that was going to put some smaller businesses out of business. It turns out, because of the labor shortage, the market wage is even higher than $15 dollars an hour. So, the minimum wage is really not having that much of an impact.

I’m a little nervous about the shoulder season this year. Typically, the shoulder seasons have been expanding, and they’ve been doing very well. But consumers are getting squeezed. Inflation is 8-9%, and, unfortunately, it’s going to get a little worse going into the fall. People are spending more on necessities. That gives them less discretionary income.

JZ: Personally, I’m a big Phish fan. Them being in town three nights, I was in my glory. But Friday and Saturday in July, we are maxed. Everybody is. If those beach concerts could be midweek, this city would thrive. It would make such a difference, because you’re going to have a great Friday, Saturday in July, anyhow.

Q: How do you feel new amusements and the water park slated to open at Showboat might impact tourism in the city?

AC: The development that’s happening at Showboat, specifically the water park, is critical for Atlantic City, because it creates a more critical mass of family entertainment that, I think, complements the whole casino experience. The city needs more of it. I think it increases the market. I think the pie grows. I don’t think we are dicing it up. I think it grows with every new attraction that comes in.

Q: What factor did you operators find most challenging with regards to employment?

EP: I think the recruiting side is definitely difficult. There’s a lot more competition out there. Do you want to do an online internship where you can make more money than you can working at the mom-and-pop store down the street? Sometimes, that answer is yes. What we have heard from some of our small businesses is that they’re increasingly hiring retirees. People in those demographics are a little more reliable. They’re staying year-round.

MB: I think this labor problem is going to continue into next year, even if the economy slows down, and if it goes into recession, I still think the labor issue is going to be a problem going forward.

Why impact of Advanced Clean Truck legislation will be huge —...