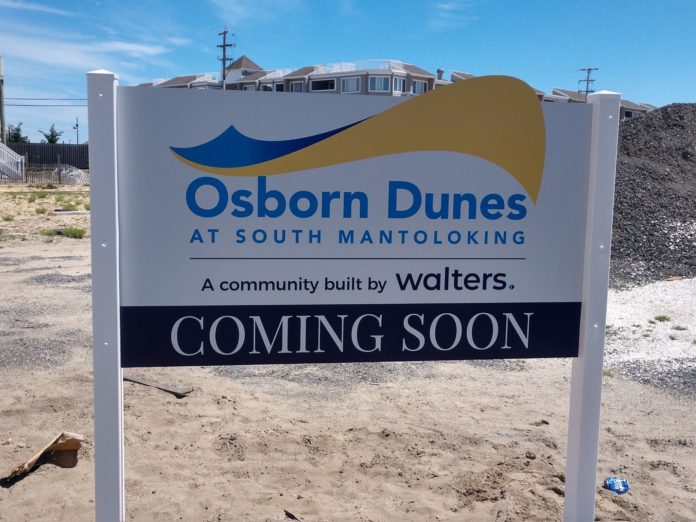 A groundbreaking ceremony to mark the start of construction for Osborn Dunes will be held Saturday at the intersection of Shell Road and Route 35 North in the barrier island section of Brick Township, according to an announcement from Walters, a developer based in Barnegat.

Located on the barrier island between Mantoloking and Normandy Beach, Camp Osborn was once a community consisting of single-family bungalows. The homes were destroyed by the hurricane surge and fire following Superstorm Sandy’s devastation. What remained was an empty stretch of sand between the lanes of northbound Route 35 and the ocean.

After a decade of negotiating various proposals, the town, property owners and other government agencies involved have reached a solution and are finally taking steps toward a new beginning.

“We worked with the township to develop a plan for duplex units to overcome the spatial limitation and the need to allow all owners to return,” John Malone, president of Osborn Dunes at South Mantoloking, the homeowners association responsible for the new development, said.

“Once the final site plan was approved by the township and all the 67 owners, we then had to negotiate easements to allow for roads and other legal matters.”

When the necessary governmental and legal approvals were completed, the task of selecting a developer got underway.

“We evaluated multiple developers and chose Walters based on their knowledge of our community, extensive experience building in a Shore environment, professionalism and competitive price,” Malone said.

NJII set to take over management of tech park