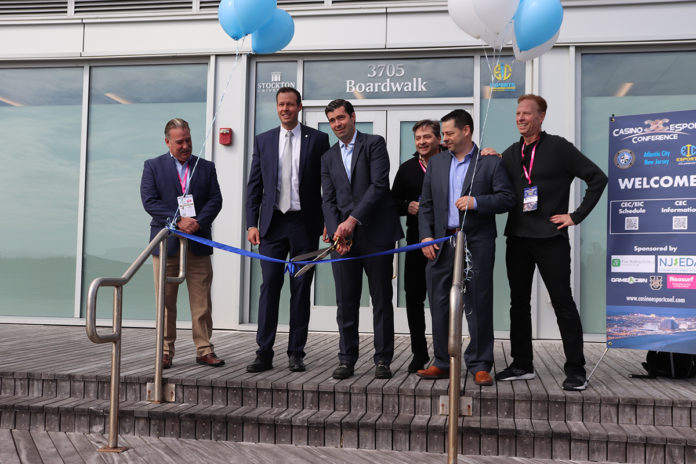 The legalization of sports gambling in Atlantic City has brought millions of dollars to the casinos — as well as increased jobs and revenue for the city.

Stockton University and the state of New Jersey are confident esports has the same type of potential.

That’s why so many were excited for the ribbon-cutting of Stockton’s Esports Innovation Center, a nonprofit that was created in partnership with the New Jersey Economic Development Authority to promote esports in South Jersey and Atlantic City.

The center is located on the Boardwalk as part of the university’s residential complex.

Tim Sullivan, the CEO of the EDA, said the EIC will help put New Jersey and Atlantic City on the map as one of the leaders of an industry that already has $1.38 billion in global revenue.

“The EIC will be a driver of strategic workforce development and will help to attract industry-supporting businesses and events,” Sullivan said. “Gov. Phil Murphy’s economic development plan is focused on bolstering high-growth sectors that create inclusive career opportunities.

“The EIC, as a center of knowledge and innovation, is adding to the momentum in this emerging and particularly exciting industry.”

EIC Executive Director Andrew Weilgus said convincing casinos to get more involved with esports will be a big part of the EIC’s mission.

“We want to help define and craft a casino strategy where they can take advantage of this growing boom of esports, both with events that come into Atlantic City, as well as potential wagering opportunities,” Weilgus said.

Weilgus said the EIC is also partnering with several local community organizations, like Stockton and the Boys & Girls Club of Atlantic City, to hold events promoting esports. The center also wants to eventually attract other esports companies to set up locations and build games in Atlantic City.

“We really believe we are going to create a great ecosystem where the next generation of esports games can be built and tested here,” Weilgus said. “All of these technologies are advancing. They are in their infancy. The center is here to promote and craft these ideas.”