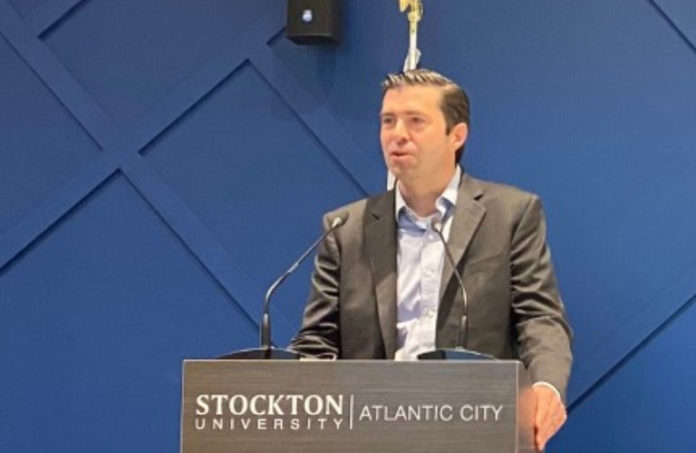 Tim Sullivan, the CEO of the New Jersey Economic Development Authority, sees all the generational benefits that a clean energy economy brings — and anything that reduces the ever-growing negative impact of climate change always should be at the top of the list.

Sullivan, however, sees something else: A sector that can produce generational-changing jobs for every facet of New Jersey’s fabric of diversity.

So, while Sullivan recognizes the economic difficulties of clean energy (yes, we’ll address the cost factor), he told the crowd at the all-day Time for Turbines energy conference Friday at Stockton University’s Atlantic City campus that the job aspect makes clean energy different from any of the other sectors that are trying to find a footing in the state.

It’s the biggest challenge for a number of reasons.

“If we don’t connect the throughput from the economics of the environment and energy opportunity, which is deeply important, to the economic onshore job creation opportunity — good, family-sustaining jobs built into an industry as diverse as New Jersey is — we will have failed in doing this right,” he said.

“We’re building this industry in the early part of the 21st century — we need to get this right from a diversity and equity perspective,” he said. “If we’re building it right, in a way that protects workers’ rights and invests in people along the way, we have this extraordinary opportunity.

That’s why parts of the clean energy economy — most notably, New Jersey’s push to become a leader in offshore wind along the East Coast — have such strong political support, he said.

It’s support, he said, that goes hand-in-hand with the creation of the sector.

For all the support clean energy has, there are plenty of challenges, too.

The financial realities that come with building a sector from scratch — something that was readily apparent during an award by the Board of Public Utilities earlier last week that was far less than many had hoped — also is an issue.

But, perhaps, nothing is as great as the need to not just train, but to simply find the workforce.

The work has started.

Robert Asaro-Angelo, the commissioner of Labor & Workforce Development, talked about how his department is aligning with various education partners to create workforce development programs — including numerous apprenticeships — for the thousands of clean-energy jobs that they all feel are coming.

“Manufacturing, assembly, construction, supply chain, transportation, logistics and administration,” he rattled off, acknowledging that there are plenty more. “Expanding workforce opportunities in the state is at the forefront of our priorities, including by going all in on apprenticeships.”

Asaro-Angelo said apprenticeship programs related to offshore wind include programs for carpenters, laborers, electricians, engineers and diesel mechanics, among many others.

“Apprenticeship reduces employee turnover and increases productivity and builds a pipeline of skilled workers and creates a built-in model for succession planning,” Asaro-Angelo said. “It also opens the door for federal and state funding and resources, because we know the importance of investing in a stronger, fairer economy for the benefit of everyone.”

But, if you think finding workers for jobs that could pay six figures would be easy, then you haven’t been listening to the unions and manufacturing communities.

They have jobs — great-paying jobs — they can’t fill.

Efforts are being made to go into the high schools to talk to students — and their parents. The EDA even has an industry-introducing coloring book for those even younger. It’s never too early to talk about how cool it could be to work on a windmill.

Sullivan said everyone knows there is no time to wait.