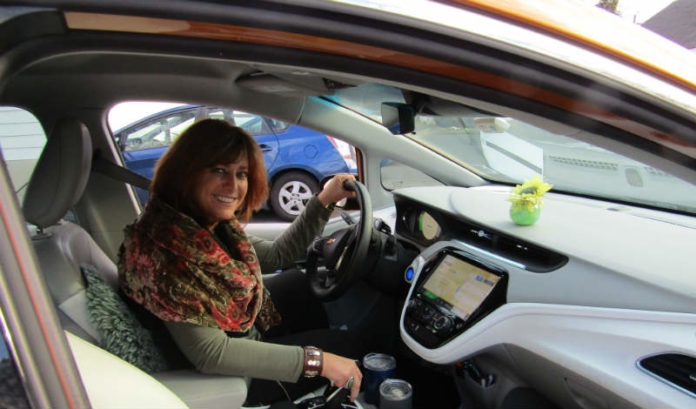 Pam Frank answered interview questions from inside her electric vehicle on the way to work. It made sense, as the head of a nonprofit coalition that promotes growth of the EV market.

But the first thing she said about it was that, when she bought it six years ago, it was too expensive.

“I actually never thought I would pay that much money for a car, and one that I call a clown car — because it’s small,” she said. “I paid about $15,000 more than you’d pay for a similar (gas-operated) car.”

So, when Gov. Phil Murphy in 2020 signed into law a rebate program, referred to as Charge Up New Jersey, that would provide at least $30 million in annual incentives for a period of 10 years, she was thrilled. As was the organization she’s CEO of, ChargEVC — after it had long lobbied for a move that would bring the cost of these consumer vehicles down.

“It’s temporary, because we do expect these vehicles to ultimately reach cost parity,” she said. “And I’m not talking 10 years; I’m talking three to five years, if not sooner. We’re just accelerating in bringing that battery cost down, which is by far the most expensive component in these cars.”

The state also laid the framework for the build-out of public EV charging along New Jersey’s 42 major roadways, which Frank said her organization was “ahead of their time” in understanding the need for. Funds set aside for charging stations in the federal infrastructure bill will “help the state get there that much faster,” she added.

She’s optimistic about the momentum behind the transition to EV-dominated roadways in the state. She expects these cars to be ubiquitous before anyone expected. That’s good … and bad.

“The first thing that needs to be ensured is that we do no harm,” she said. “In my house, I have a level 2 charger that provides me 25 miles for every hour I’m plugged in. That’s a 7.2-kilowatt device. Houses are designed to peak at around 7 kilowatts. … So, there’s going to be a problem if everyone is plugging in to charge at the same time, between about 4 to 8 p.m.”

At the same time, Frank and ChargEVC want to convey that there’s a potential for these vehicles to be grid assets — as movable sources of electricity that can potentially feed energy back to the grid.

“Those are the really important areas where we have to be spending a lot of time now to make sure we get this transition right,” she said. “There’s a lot more to explore here.”