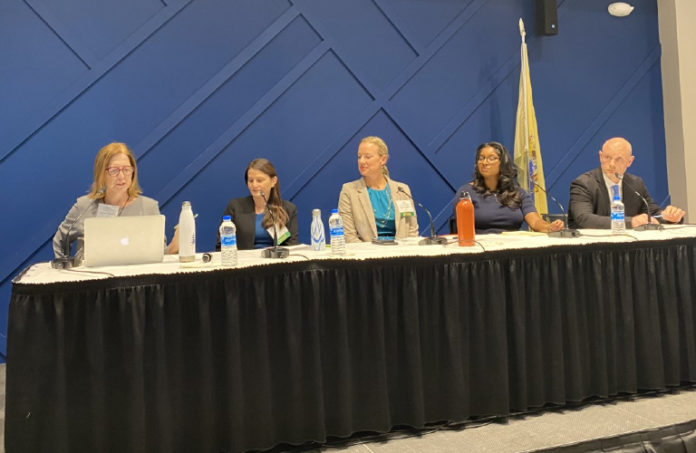 Offshore wind supporters in New Jersey have repeatedly talked about how the burgeoning sector provides the state a unique opportunity to play a major role beyond its borders. New Jersey, they say, can be the economic leader up and down the East Coast.

But, for as much as they want the state to take the lead, the desire comes with an unequivocal truth: New Jersey cannot go it alone.

That was the message throughout a panel at Time for Turbines 5, an energy conference hosted by Jersey Renews last week on the campus of Stockton University in Atlantic City.

“It’s a challenge that we need to address,” she said. “What’s incredible is that you have all of these states that are all driving toward a similar goal of building up this industry. That actually is an incredible opportunity. We shouldn’t overlook that we have these mutual goals.

“I think we just really need to identify sort of those discrete opportunities where we can unlock more market potential by working together.”

The states have a mutual interest in ensuring that the industry grows in an equitable way, making sure underserved communities are not left behind. But there also are opportunities around supply chain — especially the way the economic slowdown has impact supply chain of all industries.

“That’s definitely something that we hear a lot consistently from industry — that we really need to be working together much more closely because what we’re really trying to do is to develop a domestic industry here,” Becker said. “So, it does require more for regional coordination.”

Kelly Mooij, the director of the Division of Clean Energy at the New Jersey Board of Public Utilities, said it was the simple reality of the situation when it comes to attracting original equipment manufacturers, or OEMs.

“There are limited OEMs that are going to come — and we’re not going to get everything in the state of New Jersey,” she said. “We don’t have the space, and New York doesn’t, either.

“Bringing them here is going to be critically important for us in terms of bringing those important industries and jobs that are continuing the momentum moving forward and reducing the price for New Jersey ratepayers, which is one of the most important things for us at BPU.”

Working together is important offshore, too. Especially when it comes to how the industry potentially will impact — and disrupt — the commercial fishing industry and marine life in general.

Sean Moriarty, a deputy commissioner at the New Jersey Department of Environmental Protection, said regional cooperation is a key.

“We need to be able to regionalize that approach.”

That being said, the panelists said the state should not hold back on its wants and desires.

Preethy Thangaraj, a policy adviser for energy and environment for the administration, said Gov. Phil Murphy’s office speaks regularly to its Northeast counterparts.

“We need to make our asks heard, especially from a lot of the progressive states that are pursuing very aggressive clean energy goals,” she said.

Thangaraj said the concepts of energy hubs — whether it be for clean hydrogen or offshore wind — are gaining momentum. New Jersey officials, she said, are working to make sure the state plays a prominent role in them.

Murphy’s role as head of the National Governors Association is helping, Thangaraj said.

“He’s able to leverage some of those new relationships that he’s forming with governors across the country to discuss offshore wind, especially on the East Coast and West Coast,” she said.

“The biggest challenge is cost allocation and who’s really paying for these upgrades — and where are we delivering these benefits?”

The cost question is where a partnership with the federal government comes in. The recent Inflation Reduction Act — and other recently signed manufacturing and infrastructure bills — are game-changers, Thangaraj said.

“Folks are saying the Inflation Reduction Act is probably the most significant piece of climate legislation since the Clean Air Act,” she said. “That’s saying a lot.”

This legislation provides a number of avenues to pay for energy innovation as well as the hard infrastructure that will be needed to implement new programs and initiatives.

“It really calls for private industry to play a role and work alongside the states to ensure clean energy targets,” she said.

Which brings it back to the topic: How does New Jersey ensure it gets enough of this growing industry to set up shop here?

Moriarty said the state’s head start may provide that opportunity.

“There is a bit of competition here,” he said. “We want to make ourselves the home of this in the country. We have an opportunity to learn and lead as we are at the forefront of this.

“I think what we can do is help other states understand the challenges as they try to build out their offshore wind industry.”

Becker said doing that aligns with the ultimate aim.

“Our goal is to drive economic opportunity and job opportunities for New Jersey residents, but it’s definitely an area where we need to continue to work with New York and other states as we build up this industry in the United States,” she said.

Energy’s role in N.J.’s future: 5 questions with Sean Klimczak of...