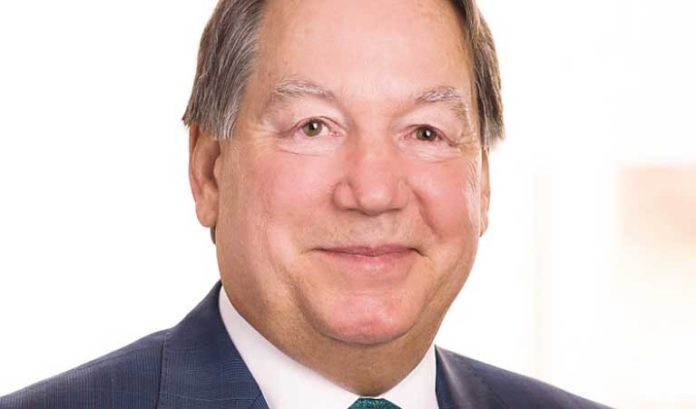 Quest Diagnostics Chairman and CEO Steve Rusckowski vividly recalls going to Washington, D.C., to meet with members of the pandemic task force to discuss how the Secaucus-based business — one of the biggest lab testing companies in the world — could somehow quickly transition to one that could handle an unprecedented wave of COVID-19 tests.

There were more than a few challenges at play:

And then, there was this: The base business of Quest Diagnostics — which processes hundreds of millions of tests annually — saw a decline of business of more than 50%, since hospitals and health care centers had stopped much of their normal business.

Amazingly, at a time when the need for a lab testing company had never been greater, Rusckowski actually had to furlough a part of the company’s 50,000-member workforce — and figure out how to pay the rest.

“We’re a big, fixed-cost business,” he said. “We had to quickly figure out how we’re going to be able to manage our way through this, because, at half your normal volume, you’re clearly losing money — and immediately getting into, ‘What do we need to do to manage our cash flow?’

“Then, in parallel, we’re trying to bring up all the testing — which was a leap of faith, because we had no commitments about reimbursement, and we had no commitments around getting a return back for capital purchases. We’re doing this all while we have this ongoing business that we had to right-size in really short order with the uncertainty of, ‘How long is this going to last?’

Quest became one of the heroes of the pandemic. Rusckowski, who had led the company to great heights since taking over as CEO in 2012, found a way to get fast, accurate testing up and running all over New Jersey, the Northeast and the U.S.

By the fall, the company not only had a handle on the testing, but much of its base business had returned, too — so much so, the company was able to return part of the money it received through the CARES Act.

“We had people that never really left the laboratory; they were working around the clock,” he said. “It was incredibly heroic work.”

Preparing for the next pandemic

We asked Steve Rusckowski, the retiring chairman and CEO of Quest Diagnostics, how the company is preparing for the inevitable: the next pandemic.

“We’ve been working with the CDC and the FDA about this topic as an industry — the ability for us to bring up tests quickly,” he said. “When you bring up a test for an unknown pathogen and virus like COVID-19, it’s going to be a test we’ve developed ourselves. We have an incredibly talented team of Ph.D.s that do that work.

“But that can only bring us so far in terms of volume. We have to do work with the manufacturers that can make these tests in a much more efficient basis for massive throughput capacity.

“What we’re working through as an industry is understanding, ‘What’s the playbook when this happens?’ We’ve had other viruses that didn’t turn out to be of the magnitude of COVID-19, such as Zika and Ebola, but it’s pretty clear that we need to have a proven playbook for what we would do — how we engage with the FDA — to quickly deploy testing. In some ways, it’s in parallel to what we have in other parts of our operating plan, where we have a disaster preparation plan in the event of hurricane or a snowstorm.”

His long-planned successor, Jim Davis, becomes CEO on Tuesday. Rusckowski will serve as chairman through the first quarter of 2023, working to ensure a smooth transition. After that, he says he’ll attack a bucket list — and spend more time with his family.

“I want to flex back on the personal side,” he said.

Rusckowski recently spoke with ROI-NJ about his career at Quest. Here’s a look at more of the conversation, edited for space and clarity.

ROI-NJ: Let’s start with the opening days of the pandemic. Talk more about how it impacted your business, which I think is lost on most people.

Steve Rusckowski: We had to take a look at our revenue operations and understand what portion of it would be slow. If you think about what we do, the front end of our value chain is collecting specimens. We have over 2,100 patient service centers throughout the United States, and we have over 12,000 phlebotomists that work in those centers. So, clearly, we didn’t need all those phlebotomists in the short run.

Secondly, we knew our laboratories wouldn’t be nearly as useful. We needed to take a look at what we needed to do to right-size them. So, unfortunately, we needed to put a number of people on furlough. And, in parallel with that, we had to invest in new platforms and invest in getting as many people being able to do what’s called molecular testing in our laboratory. It was an extension of some of the testing that we we’re doing, but it was different.

So, we had both ends of the spectrum, growing one part quickly and taking another part down — for something we weren’t certain how long it was going to last.

ROI: The pandemic brought testing into the spotlight in a way that it had never been before — for good and bad. Suddenly, everyone wants to know your business — or thinks they know your business. Talk about those challenges.

SR: People don’t realize the complexity of what we do. All people think we need to do is bring up a new laboratory with a new test. In this case, it was completely different. We actually have to acquire that specimen. And this is not a blood test. So, you don’t deal with a phlebotomist in a physician’s office — you do it with a nasal swab, and, initially, those nasal swabs were sourced primarily in Northern Italy, which was hit earlier in the pandemic, so it shut down.

In addition, you needed a clinical person to do that swabbing. And they needed to be protected with (personal protective equipment) to make sure that they’re safe.

So, it wasn’t just bringing up the laboratory, it was making sure that you can get people to where he could do the swabbing as efficiently and as effectively as possible.

ROI: How did you adjust to the need?

The pandemic laid bare the health inequities that exist in the U.S. We asked Steve Rusckowski, the retiring chairman and CEO of Quest Diagnostics, how the company is addressing this problem.

“We saw all the different issues that were being caused by the pandemic — and that they were exacerbated in underserved communities,” he said. “We said, ‘We should do something about it.’

“So, we created a program called Quest for Health Equities. We’ve earmarked $100 million for projects and programs specifically targeted to reduce health care disparities in underserved communities. We cover everything from COVID testing to what’s required to educate someone who is dealing with chronic disease, to making sure that you have good healthy food and nutrition programs.

“We feel we’ve made a lot of progress in our small way, affecting the health disparities that we see in this country.”

SR: We started working on, ‘How can we get that swab to be taken with a clinician, a doctor or nurse or by the person themselves?’ We had to run studies to demonstrate to the FDA that the ability to be able to swab without going deep into the nasal cavity would be as effective as what we were doing.

And we started to engage our relationships with retailers to be able to use their capability to have easy access with drive-throughs. That was the front-end challenge.

ROI: Talk about the back end.

SR: We needed to bring the specimens to where we have testing capacity, but labs were coming up in different parts of the country at different times. The first laboratory brought up was in California, but, as everyone knows, the initial hotspots were here in the Northeast. We had a mismatch.

It was a challenge to get those turnaround times within an acceptable range — but, eventually, after the first few months, we greatly increased our capacity, which helped improve our turnaround times. But it took a little time to get there.

ROI: How long did it take for the business as a whole to come back?

SR: We saw increases in April, May and June. By the third quarter of 2020, we had got to a significant capacity level for COVID-19, and our base business had recovered to about 85-90% of where it was at the beginning of the pandemic. By the back half of 2020, we had never been busier. But that led to other challenges.

We were fortunate because we were able to keep them whole financially for the full year. We wanted to make sure that they were paid appropriately for the work that we’re doing. We gave some spot bonuses and rewards for their courageous work.

It’s amazing. We have 50,000 people that work at Quest. About 40,000 people are in our operations team. And that’s everyone involved in the specimen process — from the phlebotomist that does the draw to couriers that pick it up to the people who work at our laboratories. And those people can’t work remotely.

They’ve been working every day since the pandemic started. I can’t begin to tell you how proud of them I am and how grateful I am.