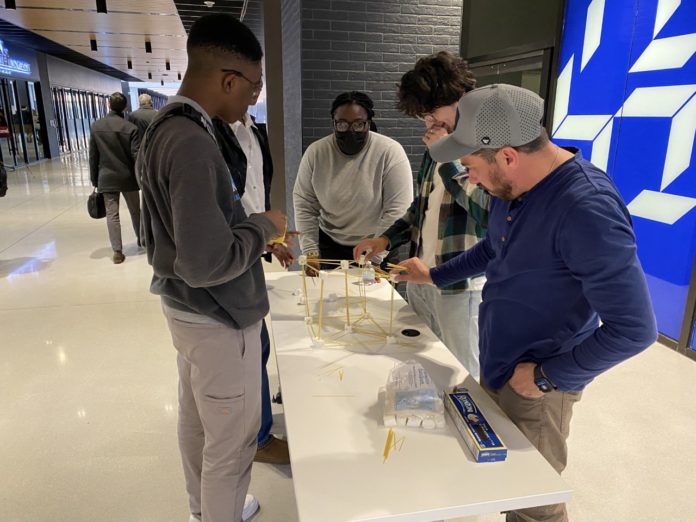 The exercise was unlike anything they had ever done before.

The groups, mostly teenagers paired with a few adults — none of whom knew each other before gathering that night in the Gateway Center in Newark — had to build a tower, using only spaghetti and marshmallows.

The challenge was to build the tallest structure possible in 20 minutes. But that wasn’t the goal.

This bit of improvisation was intended to show everyone involved that they had more in common than they thought — that they both could share a space as equals — and that they should rethink their perceptions.

This is the essence of the All Stars Project, according to Shadae McDaniel, who is the head of the New Jersey chapter of the national nonprofit organization.

“There’s a lot of different social enterprises out there, but what’s so unique about All Stars is the premise that it’s development through performance,” she said.

The All Stars Project, long a nonprofit staple in the city, will celebrate its move to the Gateway Center with a grand opening event at 6 p.m. Thursday.

Thanks to Onyx Equities, ASP now has a dedicated spot near the retailers that surround the Jewel Box, the new entrance to the towers that is intended to connect the four Gateway Towers to the city of Newark in a way that has never been done before.

The All Stars project has the same mission, McDaniel said.

The student participants, all from Greater Newark, come from Black and brown communities. The adult participants, often from the suburbs, are always older, usually affluent and often white.

“We’re using improv to break the barriers between people who would never have had this intersectionality,” McDaniel said. “We’re throwing together unlikely partners and saying, ‘You’re going to perform together.’”

Through that experience, everybody grows, McDaniel said.

“Young people start to see the businessperson, who they often call suits, and say, ‘You’re a regular person; you have ideas and thoughts like I do,’” she said. “And the adults come to realize the young people are not that different than the young people in their community.”

The All Stars Project has been in Newark for more than two decades. It was most recently located in a 9,000-square-foot space near the Museum of Art, across from Washington Park. It has been known for the terrific work it does to help teenagers build relationships with law enforcement. And to introduce teenagers to a corporate world they didn’t know much about through internships.

McDaniel knew the group had impact. She didn’t realize how great it was until the pandemic.

While most organizations failed to maintain their focus over Zoom, McDaniel quickly saw that participation in the All Stars Program stayed strong. In fact, it may have grown.

“I remember asking the kids in the first year of the pandemic, ‘How come you keep showing up?’” she said. “They said to us that they already are were so isolated, that if they don’t do All Stars, they would never be able to get outside of their neighborhoods and connect with other people and other opportunities.”

That same desire for a connection to the community also was taking place at Gateway.

About All Stars Project

The All Stars Project is a privately funded, national nonprofit organization founded over 40 years ago to create and operate free, outside-of-school development programs. There are two chapters in New Jersey (Newark and Jersey City) as well as programs in New York City, Chicago, Dallas and the San Francisco Bay Area.

Through performance, improvisation and rehearsing, young people develop confidence, appreciation and open worldview — and they then take them into their lives. ASP empowers them to dream bigger dreams and envision a path to pursue education, a college degree or opportunities in the workforce, and we create connections that make those paths realities.

When Onyx Equities purchased three of the four Gateway Towers in 2018, it did so while saying it was going to use the towers to connect to the city. Onyx acknowledged that the business space had been designed to keep it separate from the city. Onyx wanted to change that.

That’s why it decided to invite the All Stars Program to move in.

Co-founder John Saraceno, who is on the board of All Stars Project of New Jersey, has seen the good work ASP does. He wanted to help it do more.

“The All Stars Project is a premier partner in facilitating a true renaissance of Newark,” he said. “Their presence in the Gateway is a beacon to show how public and private partnerships can create transformative, positive change.

“ASP builds bridges and new connections between underserved youth and mainstream leaders, along with social and economic opportunities, and the Gateway is an epicenter where all of these groups share a sense of belonging, purpose and opportunity.”

McDaniel said the All Stars use different improvisational exercises each time they meet. It can be acting or building — just anything that brings these groups together.

All Stars Project’s New Jersey chapter, which was launched in 1999, has touched the lives of over 35,000 young people in neighborhoods such as East Orange and Jersey City, Newark and Irvington through its afterschool development programs.

The random mixture means everything, McDaniel said. And it’s not about who is participating as much as where they are working together: in a business setting.

The activities, whenever possible, are held on the concourse — forcing passersby to see the interaction. It’s another way the students at the All Stars Project can connect with the bigger Gateway community.

It goes both ways, McDaniel said.

“Imagine a world where young people — especially Black and brown young people — were welcomed into business spaces and mainstream spaces as part of their day.”

None of this big-picture stuff mattered during the 20 minutes the teams had to build their marshmallow-and-spaghetti structures. They just wanted to figure out how to beat the other groups.

They would have to work together to do so.

Be ready. All Star Project partners don’t just write checks — one of the keys to the group’s success is getting corporate involvement in the philanthropy model. Partners are actively engaged in programs. They volunteer. They host and give workshops to young people. They provide internships. They help at talent shows and cheer on the performers.

For more information, contact Jenny Zak, the vice president of development, at 212-356-8441 or jzak@allstars.org.

Big questions were being asked and answered: How big should the base be? Are you better off building in squares or rectangles? How many strands of spaghetti — jammed into marshmallows — are needed to have enough strength to support a second level?

The biggest: Can we have more time?

The answer to the final question was, “No.” And for good reason. The 20-minute limit forced the strangers to come together quickly — and taught them they could collaborate with anyone.

“Coming together with a team that I’ve never met a day in my life and forming a plan for success with no expectation of what might happen and actually making something happen was pretty cool,” one teenager said in the post-event discussion.

The time limit also served another purpose, the organizers told them: There always will be deadlines in life. Perfection is not a possibility. But working together brings a better outcome.

“Everyone always finds a way to communicate within their group,” one of the leaders said. “That’s the goal.”

One teenager saw it.

“It was fun to build stuff with people you have never met,” she said. “You’re introducing yourself to them, trying to get acquainted while also trying to accomplish something. There’s a level of camaraderie that comes with that.”

For McDaniel, the comments showed the impact the new location was having.

“This is access on another level — we’re helping to change the culture of Gateway,” she said. “This new location creates a hub where kids from Newark can feel like they’re a part of Newark’s renaissance, a part of the ecosystem of Newark and a part of the future of Newark.”