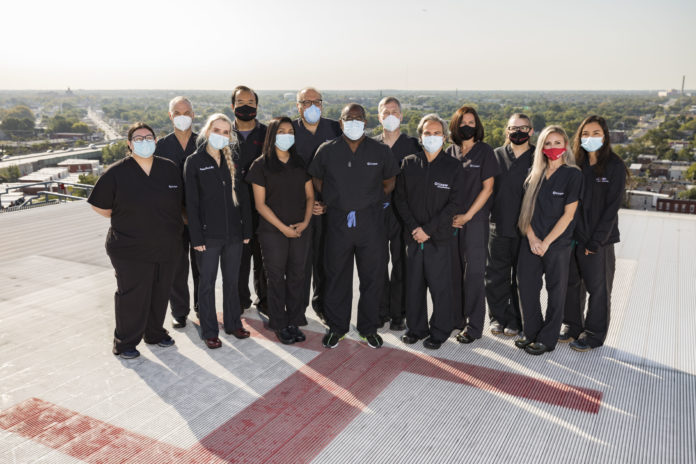 This month, the Level I Trauma Center at Cooper University Health Care is celebrating its 40th anniversary of serving South Jersey.

From humble beginnings in November 1982, starting as a “demonstration project” to assess the need for dedicated trauma services in the region, the Cooper facility is now one of only three state-designated Level 1 Trauma Centers in the New Jersey and is the busiest in the region, providing life-saving services to nearly 4,000 patients annually.

“Cooper Trauma is known throughout the regional for excellence and innovation. I am really proud of our entire multidisciplinary team, and especially all of our unique trauma nurses and techs who are ready to serve at a moment’s notice,” Dr. John Porter, head of the division of Trauma Surgery and director for the Center of Trauma Services at Cooper, said. “Not only do we provide the highest level care as soon as the patient arrives, but we also have a comprehensive range of services to support that patient and their family through discharge and beyond.”

Today, Cooper serves as the regional Trauma Center for southern New Jersey, including Atlantic, Burlington, Camden, Cape May, Cumberland, Gloucester, Mercer, Ocean and Salem counties, and is a resource for the Level II Trauma Centers in the region. In addition, Cooper is the only Level II Pediatric Trauma Center (the highest level) verified by the American College of Surgeons.

“Our Level 1 Trauma Center sets us apart and is a major reason that Cooper is the region’s leading academic health system,” George Norcross III, chairman of the board of trustees of the Cooper Health System, Cooper University Hospital and MD Anderson Cancer Center at Cooper, stated. “Cooper was Camden’s first hospital when it opened 135 years ago. The opening of the Trauma Center 40 years ago was another first for the region. Our recent announcement of a $2 billion expansion will allow us to continue to be South Jersey’s health care leader for decades to come.”

“As one of the longest tenured trauma centers in the nation, the Cooper Trauma Center’s dedicated professionals have saved thousands of lives,” Kevin O’Dowd, co-CEO of Cooper, said. “On this anniversary, we thank every team member who has served in the Cooper Trauma Center throughout the last four decades for their sacrifice and tireless effort.”

Because of Cooper’s expertise in trauma care, Cooper is the only health system in the U.S. to provide trauma training to every branch of the military through the Military, Diplomatic, and Field Surgical Affairs Department. Cooper also conducts education to multiple local, state and federal government agencies, including Project Cadence, a new program with the Department of Homeland Security, as well as community-based Stop the Bleed training for educators, first responders and lay audiences.

“The Cooper team has been on the forefront of developing the discipline of trauma care and successfully saving lives for those critically injured and ill for 40 years,” Dr. Anthony Mazzarelli, co-CEO of Cooper, said. “As one of the first Trauma Centers and now one of the busiest in the region, Cooper’s trauma experts are some of the best in health care and sought out to train others across the nation and internationally.”

Why HMH is making population health a top priority