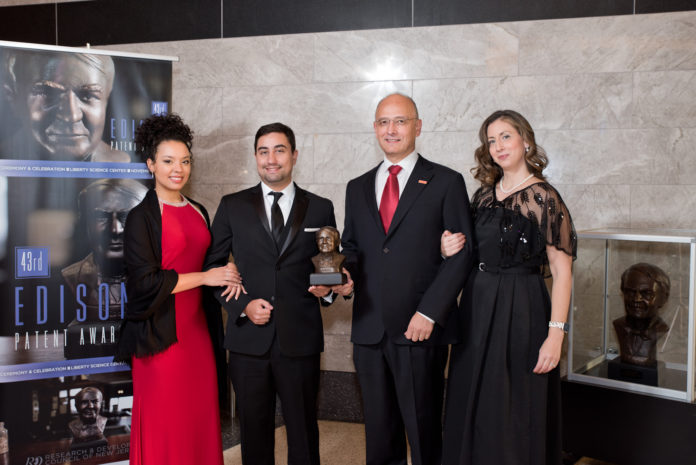 Sure, it’s a drone in the most simplistic of descriptions. But like all of the 14 winners honored at the 43rd Edison Patent Awards last week, it is anything but basic.

This drone, patented by Rutgers scientists Francisco Javier Diez-Garcia and Marco Maia, is the first to be able to travel seamlessly between air and water, which means its propellors can change their spin speed from 1 mph to 100 mph in an instant, they said.

That’s Why Diez-Garcia and Maia spent more than three years perfecting their invention.

The fact that it has immediate commercial applications is why the pair already has started a company: SubUAS. (Just imagine how this drone could ease the process of inspecting the bases of bridges or the turbines that will power the state’s burgeoning offshore wind industry.)

Gov. Phil Murphy has talked enthusiastically about rebuilding the state’s innovative economy to produce companies such as SubUAS. But this annual event, sponsored by the Research & Development Council of New Jersey, makes the case that the state is much closer to reaching that goal than many would realize.

In fact, it could be argued the state’s leadership in innovation hasn’t waned. Only the recognition of it has.

The question of the night, which even these scientists and researchers couldn’t answer, was this: Why isn’t more being done to promote the great research that already is going on here?

Should the state introduce a multi-million-dollar PR push similar to the one that made the phrase, “New Jersey and You: Perfect Together” a familiar phrase across the country in the 80s?

The state’s Innovation Evergreen Fund – an effort to help build an innovation economy – is a unique concept that already is attracting investment interest to the state, but isn’t there room to do more to promote what already has been built?

There certainly is plenty to talk about.

One by one, groups from New Jersey were honored for patents in a variety of fields that will make life better.

There was a medical device that will help more effectively close interior wounds during surgery (from Ethicon, a Johnson & Johnson company), a device to help improve indoor air quality

(BASF), a system to help better collect, study and utilize placenta cells (Celularity) and the creation of an inner tube that will make toothpaste containers recyclable (Colgate-Palmolive), among so many others.

A push for (more) STEM in schools

State Sen. M. Teresa Ruiz, honored for her work in pushing STEM in underserved communities, issues a warning: The state must do better, or it will fall behind.

Companies with global recognition, including Merck, Siemens and Stryker, were honored.

Universities with the same level of prestige, including Princeton, NJIT and Rowan, also were recognized.

To top it off, Princeton Professor Dr. David MacMillan was given the evening’s highest honor – the Science & Technology Medal – in recognition of another award he recently received: A Nobel Prize for chemistry.

It is nights such as these – when dozens of the top scientist minds in the country gather at the Liberty Science Center – that the dept of the state’s STEM base is evident.

Simply put, no other state could do this. And New Jersey, considering the patents that were not selected, could hold the event twice. What else would you expect from a state that produced both Edison and Einstein?

Tony Cicatiello, the president of the R&D Council, opened the evening this way.

“You’ll be astonished at the diversity of the research that’s going on in the state, and how effective our research community is working,” he said. “This is a night where the scientists are the stars, where the dreams of research concepts become reality, and where the state of New Jersey gets to shine the light clearly on the title, the Innovation State.”

The night was a salute to those who had reached the proverbial research finish line – never an easy journey.

The case for the license plate

It’s an older story, but the case to change N.J.’s plates to “The Innovation State,” still makes sense.

Dr. Kevin Campos, the chairman of the R&D Council and the head of process research & development at Merck, put it this way.

“It is important for us to remember that the path of innovation is not for the faint of heart,” he told the crowd. “It’s filled with moments of fear, naysayers, despair, unanticipated setbacks and outright failure.

“As Edison himself said: Genius is 1% innovation and 99% perspiration, which emphasizes the importance of grit, repeated trial and error, experimentation and perseverance.”

“That’s why we’re here tonight, to celebrate the select few who have achieved this incredible feat.”

It’s time for the state to let more people in on the secret.