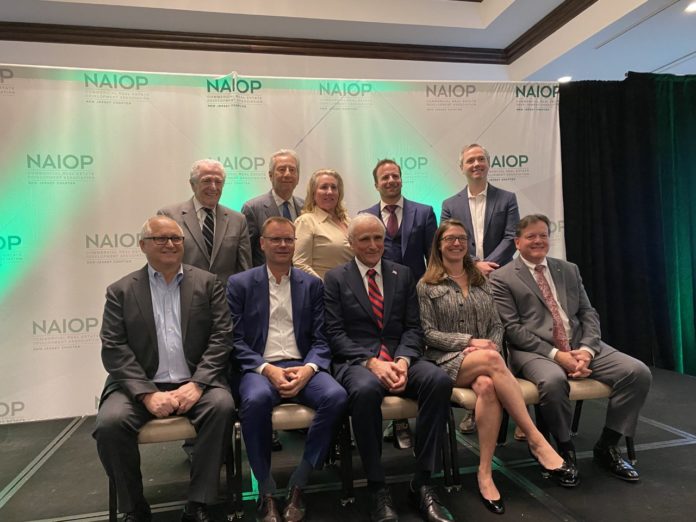 The success of her company, G.S. Wilcox, speaks for itself, as it has financed approximately $6 billion worth of projects representing nearly 60 million square feet.

But on a night when Wilcox was inducted in the NAIOP NJ Hall of Fame, she went out of her way to thank another pioneer, Anne Estabrook.

“I would not be in this position without your influence,” she said. “I thank you from the bottom of my heart for asking me to join the old ‘boys club’ back in the day.”

Wilcox’s tribute was the highlight of Monday night’s event, held at the Meadowlands Hilton. It capped a night in which eight were honored.

Here’s a look at the eight honorees:

Edwin Cohen (Prism): Cohen joined Prism in 2003 as its principal partner after an already illustrious career that saw him succeed at numerous previous stops, including Cushman & Wakefield, Grubb & Ellis and Wm. A. White & Sons. At Prism, he has completed hundreds of real estate transactions and been responsible for leasing millions of square feet in the metropolitan area. His biggest project is ON3, a transformative project on the Nutley/Clifton border.

Scott Perkins (NAI James E. Hanson): As a senior vice president, Perkins assists companies in the global acquisition and disposition of industrial and office properties. He assisted companies such as Ingersoll Rand, Cigna, Checkpoint Systems and ITT and private equity firms, including Centerpoint, Blackstone and Terreno. He holds industry designations CCIM (which involves expertise in financial and market analysis) and SIOR (which means he’s among the most knowledgeable, experienced and successful commercial real estate brokerage specialists in the country).

Gretchen Wilcox (G.S. Wilcox): She is one of the most honored leaders in real estate in New Jersey – and she still maintains her role as head of the firm, actively involved in all aspects of the business. She also is a leader in the community. She established The Daniel J. Wilcox Memorial Fund in honor of her late husband. The fund sends children to the Daniel J. Wilcox Camp Hope every summer in partnership with the Jersey Battered Womens’ Service.

Geoffrey Schubert (Lee & Associates): His career, which started in 1967, predates NAIOP, which he helped found in 1970. He specializes in the acquisition and disposition of properties for corporate, institutional and private companies, both locally and nationally.

Emily Lamond (Cole Schotz): A member of the firm’s environmental department, she is part of a national practice that specializes in developing and implementing environmental risk mitigation and management strategies.

Volunteer of the Year

Joseph Galley (GZA): A vice president, he is a member of the leadership team in the Fairfield office. His professional focus is site assessment, site investigation, regulatory compliance and site remediation.

Levi Kelman (Blue Onyx): He started Blue Onyx in 2009 – and has since created an entrepreneurial team of industry experts and hard-working professionals that share a vision of bring a fresh perspective and startup mindset to the real estate industry.