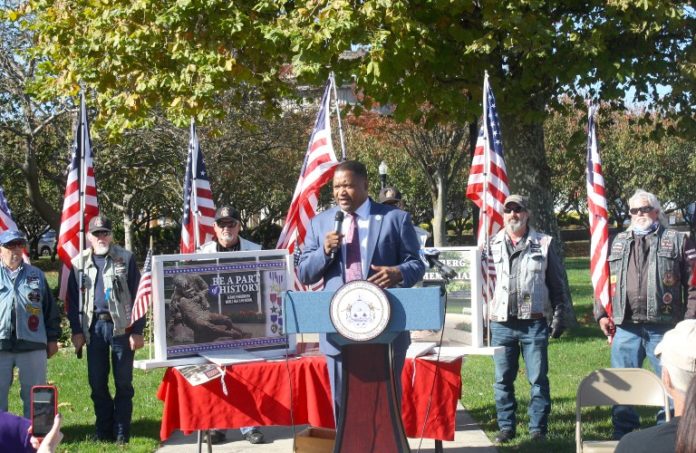 The amount is $150,000 greater than the previous $300,000 the city said it would give towards the estimated $950,000 cost for the monument. The funding announcement ensures the memorial can now be completed with hardscaping, illumination, flagpoles, paving, and other materials.

“This is the City of Atlantic City’s commitment to all veterans and all who served,” Mayor Small stated. “It is important we pay homage to the people who made this country the land of the free and home of the brave, and who continue to do so. I’m proud this statue will be right here in our great city to make sure those who made the ultimate sacrifice, like Bernie Friedenberg, will always be remembered and acknowledged. Covering the remaining funds for this memorial is simply the right thing to do.”

“Getting this assurance from Mayor Marty Small, Sr. that the funding for the Memorial has been announced in time for Veterans Day is a symbolic and emotional win, as it gives us enough time to ensure the memorial can be unveiled and dedicated on D-Day, June 6, 2023,” Bob Turkavage, who is chairman of the Friends of Bernie Friedenberg, a group of highly accomplished military veterans, businessmen, and public servants said. “We also are very appreciative of the donors who have already contributed towards the Bernie Friedenberg World War II Memorial. Bernie would be pleased that this monument will remind visitors that freedom has a cost, and that World War II was fought by brave U.S. soldiers in the name of freedom.”

Bernard “Bernie” Friedenberg grew up in Atlantic City and attended area schools. He was a freshman at Temple University on Dec. 7, 1941, when the U.S. Naval Base at Pearl Harbor was attacked, drawing the United States into World War II. The very next day, Friedenberg attempted to enlist in the military services (Marines, Navy, and Army) but he was rejected by all three services due to poor vision. Undeterred, he persisted and Friedenberg was eventually inducted into the Army as a non-combatant. He received training as a medic, attained the rank of Staff Sergeant, and was assigned to the Medical Detachment, 1st Battalion, 16th Regiment, 1st U.S. Infantry Division.

Friedenberg was deployed in many of the major battles of the War: Operation Torch in Algeria in November 1942; as a member of the “Fighting First” in the campaign for Sicily in 1943; Omaha Beach on D-Day 1944; through the fields and hedgerows of France into Germany in 1944, and the Battle of the Bulge in December 1944. In these and other battles, it was Friedenberg’s job to remove or supervise the removal of wounded soldiers from the front lines to secure aid stations where he and others would render initial medical care to them.

Friedenberg received two Silver Stars for his heroism on Omaha Beach on D-Day and later in Germany. He was also awarded two Bronze Stars for valor, and two Purple Hearts for wounds sustained in combat.

Upon returning home after the war, Friedenberg became a staunch advocate for veterans’ affairs, having served for many years as a member of the Atlantic County Veterans Advisory Board, and as Commander of a Jewish War Veterans Post. He regularly spoke at high schools and colleges in southern New Jersey on the perils of war and the true cost of freedom up until his death in 2018.

The site of the Bernie Friedenberg World War II Memorial will be on the western side of Captain O’Donnell Park bordering Albany Avenue, and close to the existing World War I Memorial and Stockton University. The bronze sculpture that will be the centerpiece of the Bernie Friedenberg World War II Memorial is being designed and created by Pennsylvania-based Fisher Sculpture, one of the foremost manufacturers of sports and military sculptures in the world. The 3,500-pound bronze statue depicts a six-foot likeness of Friedenberg cradling a wounded soldier in his arms on Omaha Beach on D-Day in 1944.