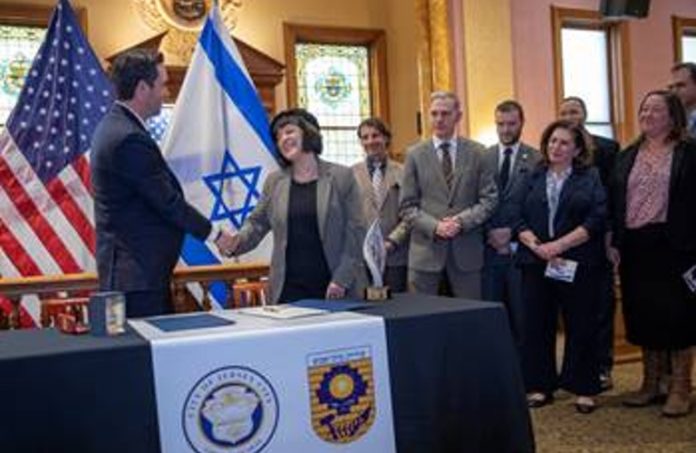 Jersey City Mayor Steven M. Fulop and the Mayor of Beit Shemesh, Israel, Aliza Bloch, signed a sister city agreement between their two municipalities this week. The agreement, which has been in development for many months, was initiated by the New Jersey-Israel Commission.

Aiming to maximize the resources of each city by optimizing their shared industries, the agreement hopes to streamline immigration and integration, lead urban revitalization in the face of rapid population growth and codify shared workforce development strategies.

Beit Shemesh, the youngest city in Israel, is a medium-sized municipality that is growing rapidly. Located between Tel Aviv and Jerusalem, its economy features light manufacturing, services, and an expanding tech sector. Mayor Bloch is seeking a major municipal partner in New Jersey to consolidate that growth. Beit Shemesh is an especially diverse community, featuring a sizeable population of new immigrants, including many Russian speakers from the former Soviet Union, and an expanding flow of North American immigrants. One of Mayor Bloch’s core goals is increasing social cohesion and understanding between these many groups.

“This is a particularly special moment not only for our Sister City relationship but also domestically as we see an unfortunate resurgence of antisemitism across the country and certainly in this region. Today is an opportunity to reaffirm our commitment in Jersey City and New Jersey to making sure that there is a strong bond with Israel, not only our words but also our actions,” Mayor Fulop said. “We look forward to building a meaningful, long-term relationship with Beit Shemesh that will establish more trade partnerships, work with corporations that can invest in both sides of the ocean, and make sure we have an opportunity to grow together.”

“It is no coincidence that this special partnership was founded between the cities of Beit Shemesh and Jersey City. Beit Shemesh has become a major player in the field of absorption and immigration, similar to Jersey City, where thousands of Jews found a refuge during the Holocaust. The connection between these two cities known for their diversity is built on a combination of willpower and responsibility. I am sure that the business community of Jersey City will see Beit Shemesh as a valuable base for economic cooperation. I would like to thank city council member Zvi Wolicki who was a partner in the previous trip in creating the connection. We are waiting for you in Beit Shemesh and are excited to continue this common path,” Bloch stated.