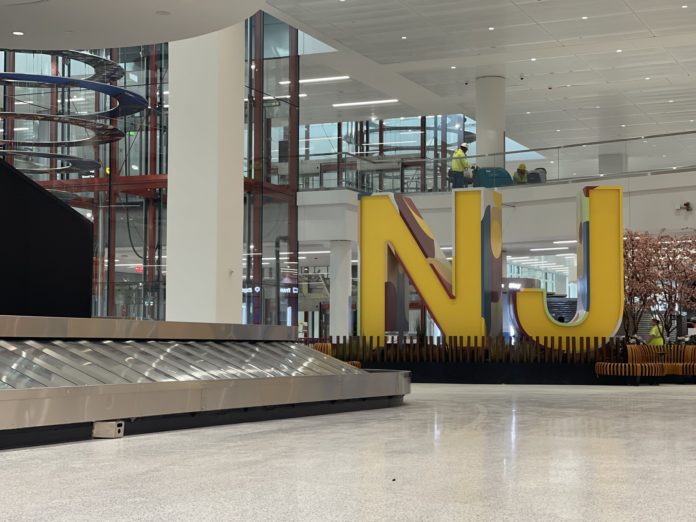 Newark Liberty International Airport debuted its new Terminal A on Tuesday. The 1 million-square-foot structure has been under construction since 2018 — but it was worth the wait.

At approximately 20% larger than the one it is replacing, the terminal features an abundance of state-of-the-art amenities aimed at keeping the airport’s customers all pleased.

It has 33 gates, a state-of-the-art parking guidance system, four-lane pickup and dropoff curbs, a touchless security and boarding experience, 60% more seating, dynamic signage, more concessions and a whole host of other passenger-friendly amenities.

The new $2.7 billion terminal is estimated to generate $4.6 billion for the regional economy and serve 13 million visitors.

“Today’s unveiling of Terminal A marks the culmination of the largest infrastructure project I have had the honor of overseeing during my administration, as well as the realization of our vision for a state founded upon sound infrastructure and fueled by economic opportunity,” Murphy said. “From uniquely New Jersey concessions to innovative public art installations and world-class facilities, Terminal A is revolutionizing travel in a state that has always been — and always will be — a model for the rest of the nation to follow. Just as importantly, while Terminal A’s transformation solidifies Newark Liberty’s status as a regional and international transportation hub, it will also spur billions of dollars in economic activity and generate the good-paying jobs upon which our communities depend.”

The new terminal features a variety of sustainable design initiatives, including solar panels on the curbside glass canopy and roof of the parking building, new electric buses to support shuttle operations, water-efficient fixtures, a “cool roof” and energy-efficient indoor lighting and controls.

Inside, there are digital technology and dining and retail options provided by 60 regional, national and global brands, including six retailers from Newark, Elizabeth and Jersey City.

It’s a traveler’s dream — especially for those who are always pressed for time. There’s a modernized common-use check-in area. And the whole place is bigger, brighter, airier with wide aisles and high ceilings. It also has a greater number of restaurants and shops located after travelers get through security.

There’s also no more hunting for parking with the Conrac building — six floors of spaces that consolidate the locations of 10 airport rental car companies and include three floors and 2,700 spaces of public parking. There’s also technology that takes the hunt for parking away, as drivers are shown exactly how many spaces are available in each lane in real time.

“The newly redeveloped Terminal A at Newark Liberty International Airport will amplify the best of New Jersey,” first lady Tammy Murphy said. “Not only will the upgraded and expanded systems and facilities be more efficient in keeping with our innovation ecosystem, but the breadth and depth of New Jersey innovation, arts, history and culture will be on display welcoming millions of travelers annually and showcasing our diverse and inclusive state.”

Tariffs can have different effects on global companies — depending on...