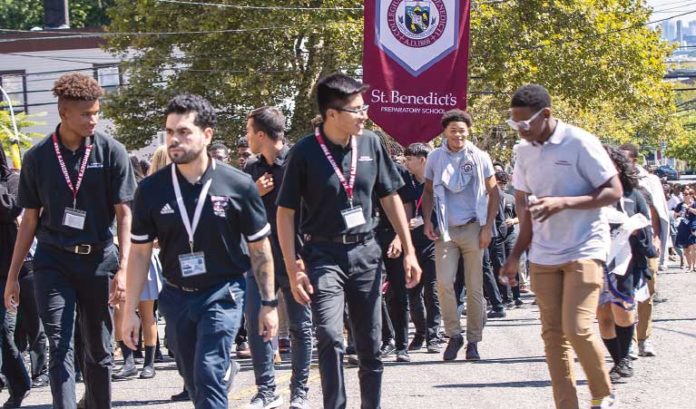 A once-in-a-generation event occurred in Central Newark recently, as the St. Benedict’s Prep community and Newark Abbey celebrated the Abbatial Blessing of the Right Rev. Augustine J. Curley, the third abbot of Newark Abbey. Archbishop of Newark Cardinal Joseph W. Tobin presided over the Abbatial Blessing at the Cathedral Basilica of the Sacred Heart, the first rite of the blessing of a new abbot in the city of Newark in more than 49 years.

A procession of more than 500 St. Benedict’s Prep students, plus faculty and staff, preceded the Mass. Student leaders, who run daily operations of the school, organized and directed the pageant from 520 Martin Luther King Jr. Blvd. to the Cathedral Basilica of the Sacred Heart. The sight of hundreds of students gathered outside the cathedral was a tangible representation of the growth of St. Benedict’s from a student body of 89 when it was reopened by the Benedictine monks in 1973 to nearly 1,000 students and a thriving K-12 Catholic school today.

The monastic community of Benedictine monks, who have been a presence in the city and served the people of Newark for more than 150 years, elected Curley earlier this year.