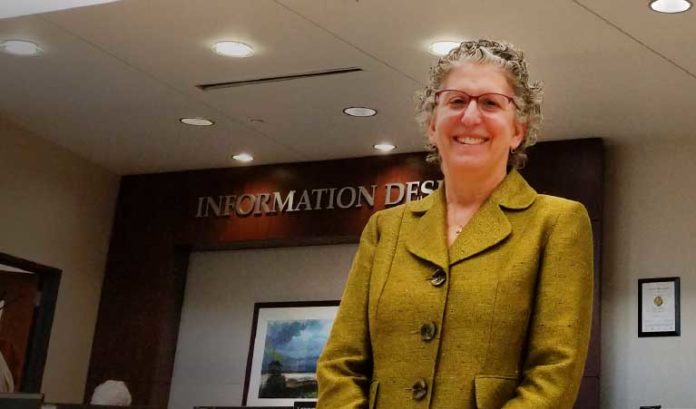 Stephanie Schwartz calls it a hidden crisis in health care.

After all, if you see a child eating a school lunch, you may not necessarily know that they didn’t have breakfast that morning — or if they’ll have dinner waiting for them that night, she said. And you won’t necessarily know how much they will struggle to get a meal during the summer, when school is out.

“Food insecurity is something that can be hidden easily,” she said.

It’s also something that will show up later.

Schwartz, the president of Overlook Medical Center in Summit, said food insecurity will manifest itself as a future health care issue in so many ways. That’s why Schwartz has made it her mission to address it.

“I believe deeply that we’re not going to fix health care if we don’t fix people’s access to food,” she said. “If you have anxiety or a behavioral health issue, being constantly worried about where your food is coming from doesn’t help.

“If you have diabetes, and you don’t have access to good food, then your diabetes gets worse.

“If you’re obese, and you are eating sugars and sodas because you don’t have access to healthy vegetables, your disease gets worse.

“So, I think it’s all tied together. It’s a natural fit. That’s why I’m really passionate about food security for families and working persons. It is a heart project for me.”

Schwartz is a highly regarded hospital leader who has served in top executive positions for years — but even she admits she didn’t see the issue until she began volunteering in a food pantry nearly 10 years ago.

“I was raised in a family where we never had an empty cabinet,” she said.

Now, while serving as a board member at the CUMAC organization, she sees it clearly. CUMAC currently serves 3,700 families a week, an increase of approximately 50% over a year ago, Schwartz said.

“This is something we’ve got to fix,” she said.

It also is just one thing on a list of items Schwartz is looking to impact.

Heart projects, she calls them. Schwartz also is working to increase organ donor awareness. She’s on the board of the NJ Sharing Network, too, one of a half-dozen or so nonprofits she has worked with in her career.

Schwartz, who is approaching her one-year anniversary as the leader at Overlook, clearly sees health care in a unique way. She recently sat with ROI-NJ to discuss how health care is changing — and how she hopes to make one of the state’s top hospitals even better.

It starts with inclusion, she said — and a willingness to see all the issues that impact all of the various communities that Overlook serves.

Here is part of the conversation, edited for space and clarity.

ROI-NJ: Let’s talk about your career trajectory at Atlantic Health. Last December, you assumed the role of CEO of Overlook Medical Center in Summit after serving as the head of Chilton Medical Center in Pompton Plains for nearly six years. Some will see it as moving from a community hospital to one of the top hospitals in the state — and the country. How do you see it?

Stephanie Schwartz: I actually see the similarities in the hospitals more than the differences. Chilton is a really great community hospital — one that has great emergency room care and cardiac care, a great nursing team and one that is there for the community. If you need a higher level of care, you may go to one of our sister hospitals, either Overlook or Morristown Medical Center.

But I see the similarities between Chilton and Overlook, too. Overlook also serves its community. And, over the last couple of years, our community has stretched into Essex County and a number of surrounding communities. But, we’re still a community hospital. We’re there when patients need the emergency room. We’re there when somebody has a heart attack or a stroke and gets brought in by an ambulance.

What’s really special about Overlook is the level of sophistication to it. It’s got an incredible medical staff — one that does brain surgery and sophisticated orthopedic surgery. There’s innovation and research studies going on here.

So, it’s still a community hospital where we are taking care of you like you’re our neighbor — and that makes it really special when you’re here — but the level of care is a little bit higher.

ROI: Talk about the things that elevate Overlook.

SS: There’s a lot to choose from. Here are two.

One of the reasons Overlook has become such a great hospital is its phenomenal neuroscience program and the research that’s going on. One of the studies that we’re participating in right now is for glioblastoma, a brain tumor. Not many hospitals offer that. We have people calling from all over the world trying to get into that study. So, that’s an area where we’re really innovating.

But, I’ll also point out our maternity services. That is an area where we have started to focus more, because the population that’s coming to Overlook is changing. We need to determine their needs and give them access to services that are going to make them healthy moms with healthy babies — that includes everything from really great technology to really great birthing suites, where we’ll deliver that care.

We know, in the state of New Jersey, that we can do a better job with maternal health. We have taken on that responsibility to do better at Overlook.

ROI: Talk about the changing populations. Some would view Overlook and only see the wealthy community that lives in Summit. Those here know that description is only part of the picture.

Our employee population looks very similar to our patient population, and I think that makes us rich. You can hear different languages in our hallways and see different cultural approaches to care, which is really important if you’re going to be successful in increasing access.

It drives us to make sure that our services at Overlook are offered to everybody, not just to a certain demographic of people. The donations that we receive from this really beautiful community that we sit in allows us to make our great technology, our great physicians and our great level of care available to everybody.

ROI: And not necessarily in Overlook itself. Can you talk about bringing care outside of the four walls of the hospital, as so many health care organizations are doing these days?

But, there’s still a need for hospitals. It’s where we will do the really critical and complicated care.

We have two beautiful robots that do general surgery and urology and gynecology, another robot for hip and knee replacement, and we have a robot that does brain surgery. Those robots aren’t going to be in the ambulatory surgery centers; you’re going to come here for that.

ROI: Talk a little more about how food insecurity became such a passion for you.

SS: In the fall of 2015, I was between jobs. So, I did some volunteer work at a food bank in South Jersey. We actually went to a senior housing community, and the philosophy was: We’re not just going to give them a bag of food, we’re going to bring out fresh vegetables and meats and things and allow them to go shopping like they would in a grocery store. And it really just hit my heart. The seniors got raspberries and avocados, not just a box of cereal or pasta and peanut butter.

I really learned during that volunteer time, sort of a gift of not being employed, about food security. And then, it just became a passion.

ROI: It’s not your only passion. Your LinkedIn profile describes you as a ‘health care executive committed to resolving food insecurity and supporting organ donation and donor families.’ Talk a little more about promoting organ donations.

People think organ donations only happen at hospitals like our sister hospital, Morristown Medical Center, where there’s a big trauma center. But organ donations actually happened often in community hospitals, too, because things like car accidents or swimming pool accidents come to us.

As a health care leader, being able to promote organ donation and being able to put processes in place in a community hospital where families and patients are able to become organ donors or have their loved ones become organ donors, has helped save and improve thousands of lives — whether it’s through tissues with eyes or with organs. One person can provide a gift of life. It’s an incredibly courageous gift.

I know it’s an uncomfortable topic to talk about. And I’m still not really comfortable with that conversation. What I’m comfortable with is talking about the courageousness to be able to donate something to someone that can give them their sight back or allow them to live with a new kidney or heart.

The New Jersey Sharing Network leads organ donations throughout the state of New Jersey. All the hospitals work with them. They have teams that come in and work with families and work with patients so that all that process takes place. We’re happy to be able to support them.

SS: I think we’re in a two- or three-year period of time of re-sorting how people work all over the world — and certainly in health care. Like everyone else, we’ve had a lot of people retire after the pandemic. And, now, we have a lot of young staff that have come in, and then we have this rebalancing.

We feel like we’ve been out of the darkest part of that pandemic. Now, we’re trying to get back to the business of health care. But it’s different. We’re certainly stronger as a result of the pandemic, but I think we’re a little bit more thoughtful, too.

It’s about cherishing time and being with the people we’re closest to.

How does someone self-quarantine — especially now, when others have been...