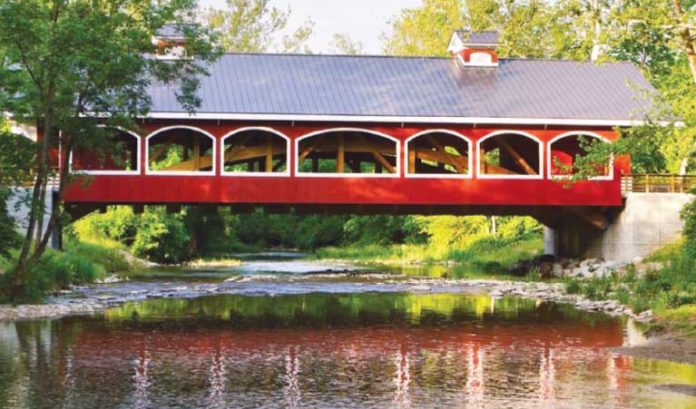 That’s how long resident Francis Walsh pondered the request before committing approximately $750,000 of his family’s fortune to a covered bridge project that will connect two park areas in the small upscale borough in Bergen County — providing residents and visitors an even greater nature trail.

How long it took for Walsh to finish the financing of the $1.5 million project that appeared to have fallen way short of its goal.

How long it took for Walsh to commit to a plan that will produce the first covered bridge in New Jersey in generations — one that will help the bucolic 5-square-mile municipality keep its historic look for generations to come.

Walsh is the CEO of National Retail Systems, a second-generation logistics company based in North Bergen that is one of the largest in the country and better known as NRS. He said he was thrilled to have the opportunity to give back to a community that has given so much to him and his family.

“Given our roots in Saddle River, our family is delighted to make this contribution to help make the town an even greater place to live,” he said.

And the realization of a nearly decade-old dream by Kurpis.

Kurpis is a longtime resident of Saddle River, too, having settled there after graduating from the Columbia University College of Dental Medicine in 1974. He raised his three children there — and has been active in local government for decades, serving on numerous boards (including the planning board and the environmental commission) and the town council before winning the race for mayor in 2015.

He said folks are attracted to Saddle River — and then choose to stay there for generations — when they discover the charm that is created by its architecture.

“We’re an oasis in the middle of the suburbs,” he said.

The borough, settled long before the American Revolution, tries to maintain a look from another era — one when Bergen County was known for being something other than the poster child for mall shopping. Residents, in fact, are still allowed to own a horse (one per acre). And it has nearly two dozen locations on the National Registry of Historic Places.

“Our downtown central business district is an historic district,” he said.

Saddle River has been able to maintain that look through projects it has taken on during Kurpis’ time as mayor. He has made enhancing its streetscape a priority, using grants from the state to fund a number of initiatives, including colonial-looking lighting, paver-style walkways and new facades for the town’s elementary school and its museum (which is an old barn), to name just a few.

“Signature towns, whether it be Saddle River or Palm Beach or anywhere else, are defined by the physical appearance of their architecture,” Kurpis said. “People are attracted to the visual nature of architecture. When architecture is unique and special, it draws people.”

When Kurpis took on an initiative to connect some of the town’s numerous parks — connecting them to landlocked areas on the other side of the small river that gives the town its name — he dreamed of doing it in a way fitting of the community’s charm: a covered bridge.

“I thought an old New England-style covered bridge would fit the architecture of the town perfectly,” he said.

The town council agreed, adding the bridge to its master plan shortly after Kurpis was first elected. The council estimated it would cost approximately $700,000 and began saving through grants from the state.

A funny thing happened along the way: Inflation hit.

When Saddle River put it out to bid last year, the project came back at roughly twice the original estimate.

The council thought the plan was dead. Kurpis had an idea.

“Before we put the kibosh on the project, I told the council, ‘Let me approach some of the more affluent, generous people in the town,’” he said.

To be clear, residents of Saddle River are as affluent as they come. Houses, often custom-made, routinely are between 10,000-15,000 square feet. It is annually rated as one of the richest suburbs in the country — one that many entertainers and athletes (and even a former president) have called home.

The first person Kurbis thought to turn to was Walsh.

“His family has been traditionally known for supporting the town financially for a lot of these extra projects,” he said.

It stepped up again.

The project, he said, will be unique.

It’s not just its size — approximately 80 feet long, 10 feet wide and 9 feet tall — or the fact that no one can recall the last covered bridge to be built in the state.

It’s the location. Because it will be constructed in what could be considered a nature reserve, steps need to be taken to ensure the land will not be impacted.

The bridge, in fact, will be built in Texas, then shipped — piece by piece — to New Jersey, where it will be fitted to beams that stretch from side to side.

Chris Statile of Statile Associates in Oakland has been hired as the design engineer, Spence said.

The project, which is in the midst of planning, should begin around March 1 and be done in 2-3 months — or in time for summer, Spence said.

Kurpis calls it a legacy project. One that will be worth the wait.

After all, how often do you get to add a covered bridge to your community?

“There probably hasn’t been one built in New Jersey in 100 years — and there may not be another for 100 years,” he said.

Walsh said he was happy to help.

“Opening up landlocked acreage for walks and birdwatching while also enhancing our downtown establishments is something we are proud to help support,” he said. “The fact that we are helping to add to New Jersey’s covered bridge history is an added bonus.”

One that only took seconds to ponder.