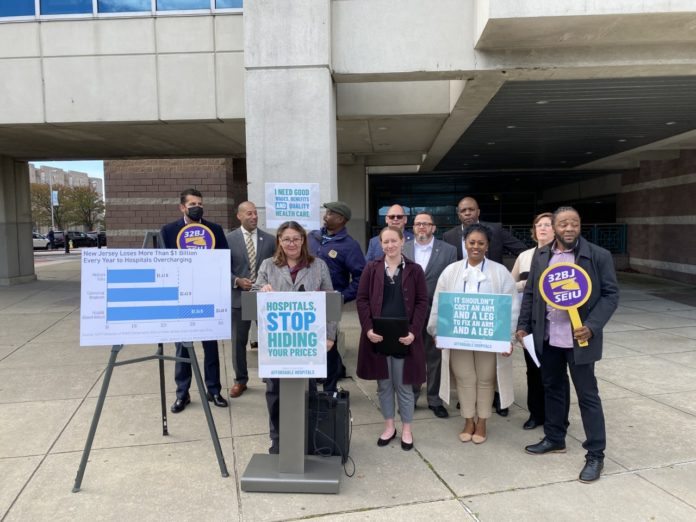 A group of some of the most influential unions and community organizations in the state — spurred by a report from the progressive-leaning New Jersey Policy Perspective — came together Tuesday to announce the formation of the New Jersey Coalition for Affordable Hospitals, a group aimed at bringing something that everyone seemingly already wants: affordable pricing at hospitals.

The group, which includes unions such as 32BJ Service Employees International Union, the Communication Workers of America and the New Jersey Education Association, said its members are being overcharged for hospital services — an action that is creating some of the disparities in health care coverage in the state, they said. These hospital charges, they said, are continuing despite the recent and dramatic rise in the cost of the state health benefits program.

The coalition announced its formation during the League of Municipalities event in Atlantic City because it feels all government entities are hurt by the rising costs associated with health care.

The announcement came in conjunction with the release of a study by NJPP, People Pay, Hospitals Profit, which said the state may be paying $1.26 billion more for hospital care than the study said was necessary to provide quality coverage while covering hospital expenses.

The union representatives emphasized two points: Their coalition does not blame the state’s health care workers for the issue, and that these rising costs impact everyone, not just union members — since the state is the largest purchaser of health care services in the state.

“Every dollar that hospitals overcharge our state is $1 that doesn’t go to a crucial service,” CWA New Jersey Director Fran Ehret said.

Brittany Holom-Trundy, a senior policy analyst at NJPP and the author of the report, said the study shows the impact pricing has on health equity for all.

“Everyone in New Jersey deserves access to affordable care, as we all know, yet high and continuously rising health care prices hook quality coverage out of reach for far too many,” she said. “As insurance costs rise, families risk losing access to vital care right now, threatening all of the advances in health equity that we have made as a state over the last decade.”

Getting to the root of the problem is difficult, Holom-Trundy said.

“The patchwork health care system in the U.S. means a complex network of factors hides the true causes of rising costs, including high hospital prices,” she said. “This results in actors across the system playing the blame game and policy leaders stalling in advancing meaningful change.”

Cathy Bennett, the CEO of the New Jersey Hospital Association, said her group welcomes the report and agrees with the desire for affordable health care.

She also agreed getting an understanding of the total costs associated with health care is an important factor in the issue — and a complicated one.

“We welcome the recent interest from the Coalition of Affordable Hospitals as access to affordable, quality health care is a priority for all our member hospitals and demands a thorough and honest discussion about the many factors that drive costs,” she said in a statement hours after the event.

The New Jersey Coalition for Affordable Hospitals includes a number of key unions and community organizations — a roster they expect will continue to grow. Here are the members that were announced Tuesday, during the launch of the NJCAH.

“Everything from labor costs to medical supply costs to pharmaceutical expenses to government policies that shift costs impact the price of care. Government’s underpayment for the actual cost of providing needed Medicare, Medicaid and charity care must be addressed, along with the impact of social issues like housing and nutrition that increase health risks for many New Jerseyans.

“To truly begin to understand these costs and develop strategies to control them, we need to bring everyone to the table — hospital executives, unions, insurers — and have a serious conversation that goes far beyond simple finger-pointing.”

When, if or how such a meeting will take place is unclear.

The coalition said it is eager for such a meeting — one members said should start with the release of a state-commissioned study by the Rand Corp., a national leader on researching hospital pricing trends. It recently conducted an analysis of the N.J. state health benefits program’s pricing.

The NJCAH believes that report should be made public, as it would provide vital information for all New Jersey residents on one of the major drivers of the state’s current fiscal crisis. The group said it sent a letter last week to New Jersey Treasurer Elizabeth Maher Muoio requesting a public release of the report.

The Treasury Department responded to the report – and the request – as follows:

“The Rand report presents data from 2016 to 2018, predating COVID and historic inflationary pressures, which were the primary drivers of the recent increase. It also does not reflect the impact of plan design changes adopted since the time period captured in the report, meaning the data about hospital and provider pricing is outdated. The report was made available to the health benefit commissioners on a confidential basis in August. The report is under review for potential release to the public.”

The NJPP said its report showed how hospital prices are costing workers thousands in lost annual wages and putting a major financial strain on municipal and state budgets.

The coalition said it believes that the state must step in and take policy and regulatory actions within its power to address these pricing issues. The coalition also said the large amount of charity care provided by hospitals was factored into their findings.

Debating the cost and impact of charity care also figures to be an issue.

Last month, the NJHA released a report, Always There for Patients & Community, on the impact hospitals had during the first year of the pandemic.

In 2020, the pandemic’s first year, the report found that New Jersey hospitals and their employees saved lives, protected their communities through vaccination and continued to provide $3.4 billion in additional community benefits, including food assistance, mental health support and free and discounted care.

This number included an estimated $2 billion that was spent on charity care — or care that hospitals were not reimbursed for.

Other comments surrounding the release of the report and launch of the New Jersey Coalition for Affordable Hospitals: