Home Politics The League: How some are standing out in a stream of parties...
Facebook
Twitter
Linkedin 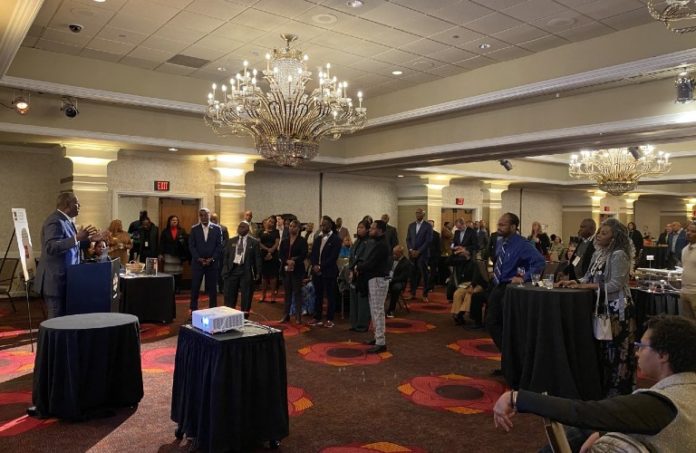 John Harmon, the CEO of the African American Chamber of Commerce of New Jersey, was happy to have a room full of guests at his annual League of Municipalities party — the one that always seems to have the best food and the best music.

He was happier still to introduce a long list of elected officials that had come to mingle with the large contingent of chamber members and guests in the room.

But if you think Harmon, the founder and CEO of the AACCNJ, was going to let the well-wishers leave the ballroom at the Hard Rock Hotel and Casino without a few marching orders, then you don’t know Harmon.

Or the power of the League.

The three-day event features dozens of breakout panels and hundreds of vendors in what is arguably the biggest expo in the state. It may be better known for its seemingly endless stream of parties at numerous casinos and hot spots around the city — events that offer rare opportunities for such business and government leaders to stand side by side.

Harmon took advantage of that, telling his guests how the Black community still isn’t getting its fair share of construction jobs and cannabis business — and how it still is paying more than its fair share when it comes to auto insurance premiums.

The reason, Harmon said, was simple: Elected officials are not being made to understand the importance of these issues to this community. He implored those in the crowd to do so.

“You need to be heard,” he said, rallying the group in a speech that only Harmon can deliver.

The beauty of the League is that this outreach cuts both ways. Politicians can reach out, too.

Later in the evening, at the Statewide Hispanic Chamber of Commerce of New Jersey event, Republican leaders — including Jack Ciattarelli, the early front-runner to be the party’s candidate for governor in 2025, and legislative leaders Steve Oroho and John DiMaio — spoke to the hundreds who gathered at the Noyes Arts Garage.

Yes, there were plenty of Democrats in the house, but the bipartisan representation made it clear that everyone feels the Hispanic vote is in play — something that pleases Carlos Medina, the CEO of the Hispanic Chamber.

“It makes me proud that the work we do for our members and the business community is recognized by both political parties,” he said.

Medina said he’s never been affiliated with a party — and that he wants to keep it that way.

“I am not red or blue,” he said. “I just want our members to see more green.”

Which brings us back to the original point: The League is a unique opportunity for visibility that can drive revenue.

That’s what led the New Jersey Pride Chamber of Commerce to host an event for the first time.

The group took an early time spot — 10 a.m. to 2 p.m. Tuesday at the Borgata — and used the event as more of a workshop. It was one of a handful of events the Pride Chamber took part of in a three-day effort to show municipal leaders its size, smarts and spending power, Executive Director Gus Penaranda said.

“So, when we sat down with Garden State Equality to decide how we can make a statement about how big our community really is, and how big its reach is, we all agreed it should happen at the League of Municipalities because more than 500 municipalities will be there.”

Penaranda said more than 100 showed up for the event. It’s a number he’s confident will grow as the gathering becomes an annual event.

The Pride Chamber already has seen it happen.

The chamber, which started the year with 95 members, expects to be over 300 by the end of the year.

When it comes to handshakes, hugs and high-fives, Murphy thinks social...

Murphy details meetings with Palestinians and Israelis during overview of foreign...