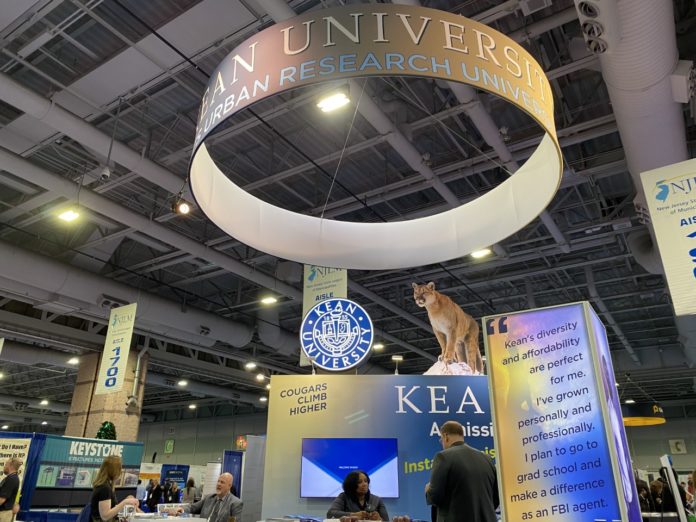 If attendees at the New Jersey League of Municipalities event in Atlantic City this week didn’t notice “Kean University” written on both ends of their lanyard — or even the not-so-subtle reminder that it promotes itself as “N.J.’s Urban Research University” — they got a reminder that Kean was all-in at the event when they walked into any of the doors leading to the massive expo of vendors.

Hanging from the ceiling in the middle of the room was a revolving circular Kean University sign — hanging just above the school’s crest and a cutout of the school’s mascot.

Underneath it was arguably the biggest vendor plot of the show — one that had four desks manned by school representatives, ready to take questions or comments from all sides.

Kean was making its presence felt in a big way.

Don’t be confused. This was not a simple marketing ploy. This is part of an approach the school has been taking to raise its profile since former Education Commissioner Lamont Repollet was named president in May 2020 — a goal that got a boost when the state designated it as an urban research university.

It’s why Kean was one of just a handful of institutions at the event — one that generally draws hundreds of businesses eager to get municipal contracts.

“I don’t think we have set our sights on the final destination yet,” he said. “But we know we want to start by having an impact, not just in our inner cities and urban areas, but in all communities in New Jersey.”

Salvatore spoke with ROI-NJ about Kean’s aspirations — and whether it will become a regular at business networking events such as the League of Municipalities’ expo.

ROI-NJ: Talk about the idea of not only coming to the League, but coming in such a grandiose way?

We want to be in that space because we intend to do research in that area. And we certainly want to have an impact with our research beyond just a publication.

ROI: When an elected official or town official approaches your huge booth, what’s the pitch you are offering?

MS: First and foremost, we want to hear their issues and learn about what matters to them. But we also want to begin to create partnerships: Is there an opportunity for us to do research within their organization or within their town — or with the major corporations and businesses within their municipality?

We’re also looking at this from a career service perspective. We want to introduce them to our Kean network and talk about creating a pipeline for internships. So, our pitch is far beyond just enrolling in a course or a program — though we certainly have those opportunities. Our pitch is full scale for our students and research.

ROI: You talk about being an anchor institution for the state. And, with satellite campuses in Trenton, Toms River and Jefferson Township — as well as an English-speaking school in Wenzhou, China — you certainly have the base for it. Is there any university that you are modeling yourself after?

MS: We certainly want to take the best practices from those around us, but our president wants us to chart our own path, so we stand out. We certainly have high expectations for where we want to be in the future.

ROI: Speaking of where you will be: Should we count on Kean having a major presence at other major business networking events around the state?

MS: Kean already has a huge footprint on the teachers associations, such as the NJEA, and we’ve recently expanded that to the New Jersey School Board Association, as well. We’re looking to do more.

And we plan to not just be in the conversation, but to help facilitate the dialogue and events up and down the coast and all throughout New Jersey. Like I said, ‘Cougars climb higher.’