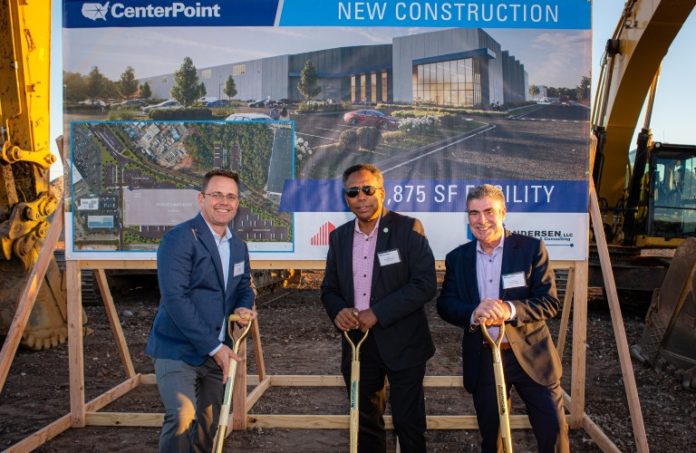 Officials from CenterPoint Properties and the city of Linden gathered last week to mark the beginning of construction on 321,875-square-foot Class A industrial distribution facility 11 miles from Port Newark-Elizabeth.

Ronel Borner, CenterPoint’s senior vice president of development, touted the easy access to two Interstate 95 interchanges 4 miles away as one of a host of benefits the new facility will offer tenants.

“CenterPoint Properties believes in investing in logistics properties located in strategic markets with access to critical regional infrastructure like ports, major interstates and airports. Linden checks all those boxes. We’ve got the Port, Interstate 95 and, of course, Newark (Liberty) International Airport 8 miles away,” Borner said.

Borner praised Linden officials for having the foresight to redevelop the site, which formerly was home to a Walmart-anchored retail center. Linden has lowered municipal taxes for six straight years, he said, in large part due to economically beneficial initiatives such as CenterPoint’s project. He went on to note that many of the businesses in the previous retail space have relocated nearby, a testament, he said, to the city’s pro-business climate.

“I believe that’s indicative of the type of environment that the city of Linden’s created, one where businesses and residents alike want to be. CenterPoint’s looking forward to being part of this thriving business community in Linden for many years to come,” Borner said.

“The warehouse is going be one more of our attractions here in town, (delivering) five times the tax ratables that we were accustomed to getting here. To me, that’s a win,” Armstead stated.

The new facility is slated for completion in August 2023. Borner said it was “designed to cater to the needs of today’s demanding tenants,” with a 40-foot clear height, 50 loading docks with room to expand and parking for up to 100 trailers and some 250 cars. He also said CenterPoint is working toward LEED certification and has incorporated a number of sustainable features into the design, including electric vehicle charging capability and solar panels on the building’s roof.