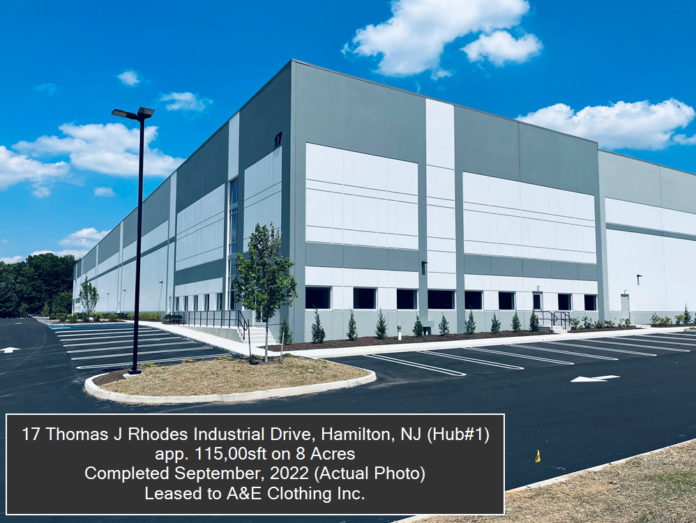 Situated on 8 acres of land in what is known as Hub 1, the 115,000-square-foot building was developed by 17 Thomas J Rhodes Industrial Drive LLC, constructed by ARCO Design/Build Inc. and completed in September with the A&E Clothing’s transition into the facility later in the month.

A&E Clothing will be its sole tenant of the industrial property.

A&E Clothing is a privately family-owned company that processes used clothing and exports overseas as well as distributing in the U.S. Additionally, it also has a chain of retail thrift stores.

Both the land site (which involved an assemblage of properties) and procuring the tenant were exclusively brokered by Howard Applebaum, president of Corporate America Realty & Advisors.

Since the company collects its clothing from New Jersey, New York, Pennsylvania, Delaware, Connecticut and Maryland, the location of the asset in Hamilton offered a strategic area with excellent regional logistics.

Once completely moved in, A&E Clothing will be employing over 125 employees at its new facility.

Prism announces next phase of construction at Residences at Edison Lofts