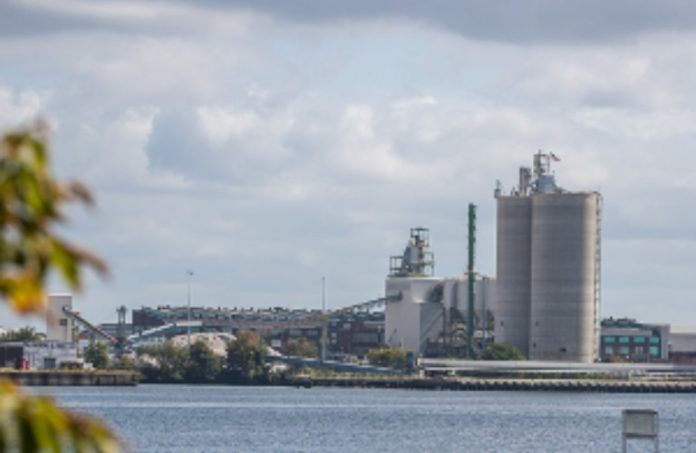 Lehigh Hanson, a core tenant and partner at the South Jersey Port Corp. that views itself as an aggressive ally in battling climate change, is working hard to reduce its environmental footprint and is committed to becoming carbon neutral.

Lusmerlin Lantigua, plant manager of the Lehigh Hanson slag grinding facility in Camden, detailed some of its efforts in a recent report.

“The climate is changing in ways that impact our planet and contribute to rising temperatures, rising seas, flooding, and droughts,” she said. “We all must strive to reduce our energy use, conserve water and protect our natural resources. As a company, we are committed to achieving net-zero emissions.”

HeidelbergCement, the global parent company of Lehigh Hanson, is one of the world’s largest integrated manufacturers of building materials and solutions, with leading market positions in aggregates, cement and ready-mixed concrete.

As a forerunner on the path to carbon neutrality, HeidelbergCement officials said they craft material solutions for the future.

As part of its commitment to be a worldwide leader, company officials said they have increased their focus on sustainable products, driving the circular economy through an emphasis on recycling and recycled products and working to decarbonize the industry.

Andy Saporito, the CEO and executive director of the South Jersey Port Corp., said its efforts are having an impact.

“Lehigh Hanson has been a good business partner in creating good-paying jobs through its operations and importing and exporting millions of tons of product to support the region’s infrastructure needs and it is, admirably, a leading ally in the port’s commitment to becoming, with great urgency, a better neighbor by operating cleaner and greener,” he said.

Saporito noted that SJPC is in the process of purchasing $6.6 million worth of electric cargo handling equipment and installing an electric charging station at its Balzano Marine Terminal.

Lantigua said Lehigh Hanson’s carbon-neutral strategy goes beyond reducing the carbon footprint of its plant. It also focuses on the cement, concrete and other construction materials it produces, she said.

“Cement is the key ingredient in concrete, the most widely used building material in the world,” she said. “Our slag cement significantly lowers the environmental impact of concrete.”

Slag cement is 1.2 times stronger than Portland cement and, more importantly, emits six to 15 times less carbon into the air than regular Portland cement. The slag is the waste from making steel and is repurposed to make stronger concrete to build dams, bridges, highways, airports and buildings, which in turn will reduce overall emissions at upwards of fifteen times.

The alchemy in the Lehigh Hanson strategy is converting a waste product to reduce carbon emissions, a win-win for the environment. With two slag cement plants in North America, they are the market leader for slag cement.

With a capacity of 600,000 tons annually, Lehigh Hanson’s highly efficient Camden plant at Broadway Marine Terminal is 90% automated and employs 14 full-time employees, not including the stevedores, truck drivers and other supporting workers. It imports steel slag from Japan and, by barge and truck, supplies its slag cement product for the construction industry throughout the mid-Atlantic, from Virginia to upstate New York.

Amazon to open Woodland Park site — but it’s not start...