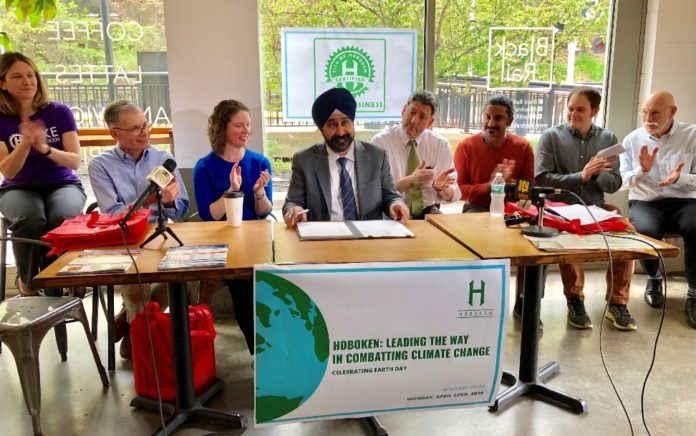 The city of Hoboken was recently announced as the only city in New Jersey and one of only 121 municipalities worldwide to receive a top score on climate action from the environmental impact non-profit, CDP. Hoboken’s distinction was achieved by only 12% of the 1,002 participating cities and counties.

“There are few cities across the country that feel the impact of climate change more than Hoboken, which is why it’s critical we continue to do all that we can to mitigate its effects,” Mayor Ravi Bhalla stated. “I am honored that CDP ranked the city on its prestigious ‘A List’ for climate action, and I thank our Department of Environmental Services and the residents of Hoboken for implementing the action items within our ambitious Climate Action Plan into their daily lives. I look forward to continuing our progress as we strive to be carbon-neutral by 2050 and net-zero energy by 2030.”

Bhalla signed an executive order in 2019 establishing the city’s Climate Action Plan, which provides key action items to further the city’s goals to be carbon-neutral by 2050 and net-zero energy by 2030.

Since then, Hoboken has taken significant steps to mitigate its contributions to climate change, which includes the phasing in of hybrid and electric vehicles to the city’s municipal fleet, reducing dependency on fossil fuels. So far, the city has replaced 17 vehicles and will also purchase a new electric garbage truck and Hop shuttle bus utilizing $1.2 million in state funding awarded by the New Jersey Department of Environmental Protection.

The city also expanded its residential composting drop-off program in 2021 from four sites to 12, making it more convenient to drop off compostable materials while reducing landfill contributions. Hoboken also banned single-use plastic bags and Styrofoam food containers by ordinance in 2020. In September, Hoboken announced the Zero Waste initiative to reduce greenhouse gas emissions and improve the quality of life for residents as part of the Climate Action Plan, as solid waste accounts for approximately 10% of the city’s GHG emissions.

In addition, Hoboken is making it easier and more cost-effective for residents to reap the benefits of renewable energy. Last year, Hoboken launched the Hoboken Renewable Energy Program, which provides homeowners with 10% more of their power from renewable sources than the state mandated standard. This year, the city began enrolling qualifying residents in the new Community Solar Program, which will provide low- to moderate-income residents with solar energy from an offsite location, reducing their electric bills by an average of up to 25%.

“Congratulations to the city of Hoboken for earning a spot on the CDP Cities A List — one of 49 cities and counties in North America to make the list in 2022,” said Katie Walsh, head of cities, states, regions and public authorities, CDP North America. “From mitigating carbon emissions in line with science, to building resilience against floods, drought and other climate hazards, to centering marginalized and vulnerable communities in their response, A List local governments are demonstrating best-practice environmental action. Hoboken is in the vanguard of cities and counties leading the way toward a climate-safe future.”