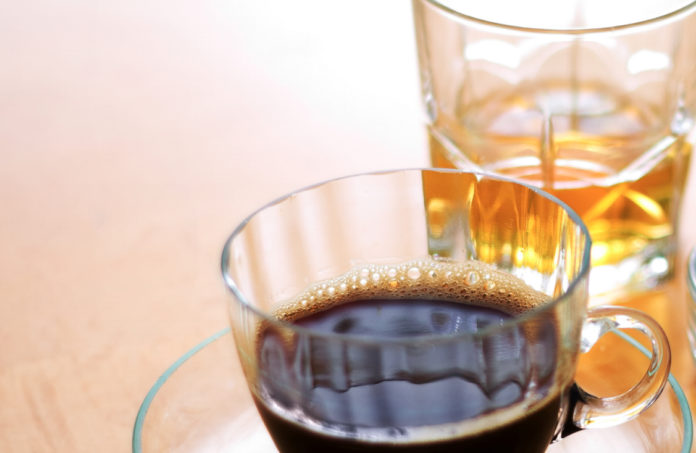 We all know the people who “work hard, play hard” — which is a fun way of saying they drink alcohol all night and feel it does not impact their abilities the next morning.

And we all know the people who can drink coffee/caffeine all day and say it doesn’t affect their ability to sleep at night.

But, did you ever think to count up just how many people you know in each category? Or both categories?

According to a recent study commissioned by DrugGenius.com, millions of people around the country are fueling the workday with coffee and taking the edge off in the evenings with alcohol.

In New Jersey, we do it better than most others.

The survey found that 32% of the average New Jerseyan’s daily fluid intake is made up of booze and caffeine — above the national average of 30%.

Let’s be clear, studies such as these are not always the most scientific in nature. The numbers around New Jersey, however, are noteworthy. Consider:

Alcohol has been a part of American culture since its beginning. And the coffee culture is so prevalent, nearly half of all drinking establishments in some locations are now coffee shops.

While numerous studies have revealed the health benefits of coffee, and others argue that alcoholic drinks such as wine can be good for the body, a diet lacking in sufficient water can lead to headaches, fatigue, dull skin, weight gain and sluggish bowel function.

That’s not the only price to pay.

The study showed the average drinker spends a fairly substantial amount per year ($947) on hangover comfort food and coffees.

And the love of booze is so profound, the average drinker could gain an additional 13 pounds based solely on their alcohol input.

While all alcohol can lead to a plethora of health problems, too much caffeine can also lead to anxiety and dehydration.

Does all of this sound too familiar?

If it does — and you’re looking to make a change — consider these five alternatives, provided by officials at DrugGenius.com.

We’ll admit, none of them sound as appealing as coffee and booze.