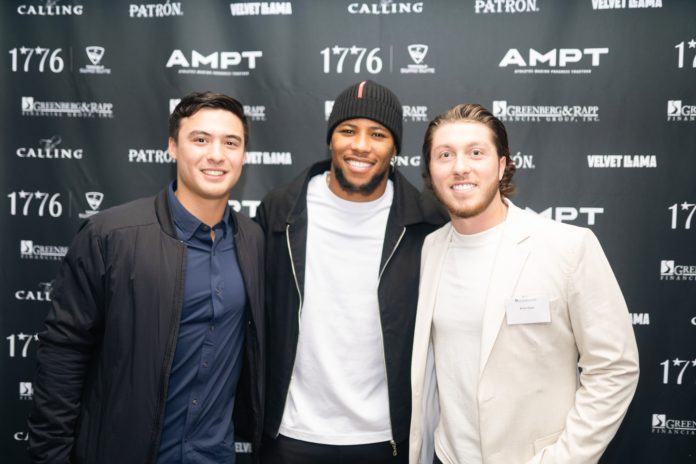 The event earlier this week brought together business executives, community leaders and professional athletes in a night full of food, drinks, networking, virtual golf and a silent auction with starters from the 7-4 New York Giants.

“What an incredible night coming together for an incredible cause,” AMPT President Jackie Nunes said. “It’s important for us to bridge the gap between professional athletes and the community in all different capacities. We’ve produced youth camps, golf outings and charity events in the past. This was our first time hosting a networking event and, with much success, I know it won’t be our last.”

Already this fall, AMPT has facilitated a September Back to School Supplies Drive benefiting the Boys & Girls Club of Clifton. AMPT along with Belton, Justin “Jelly” Ellis and Gates of the Giants delivered the donated supplies and spent the evening meeting, talking to and playing with the kids. In November, AMPT supported a Thanksgiving dinner with Montravius Adams and Pat Freiermuth of the Pittsburgh Steelers, benefiting the Boys & Girls Club of Carnegie.

Greenberg & Rapp founder Thomas Rapp stated: “We are truly honored to be able to take part in such a great event. These Giants are all amazing athletes at the top of their game. Saquon Barkley and Azeez Ojulari are destined to become New York Giants legends, and what a great season they are having. AMPT, 1776 and Greenberg & Rapp are all at the top of our games as well in our respective fields, and it’s nice to make this all come together for a great charitable cause. As we transition our headquarters into Morristown and the surrounding communities, we have a commitment to lean into causes like this to better serve everyone around us. Collaborating with AMPT allows for us to not only deliver the financial needs of our pro athlete clients, but it fosters an avenue to enable them to give back, as well. This event and the community have welcomed us with open arms, and we couldn’t be prouder.”

In December, AMPT will host two holiday parties at Boys & Girls Clubs in New Jersey, one featuring Ojulari and one featuring Braxton Berrios of the New York Jets.