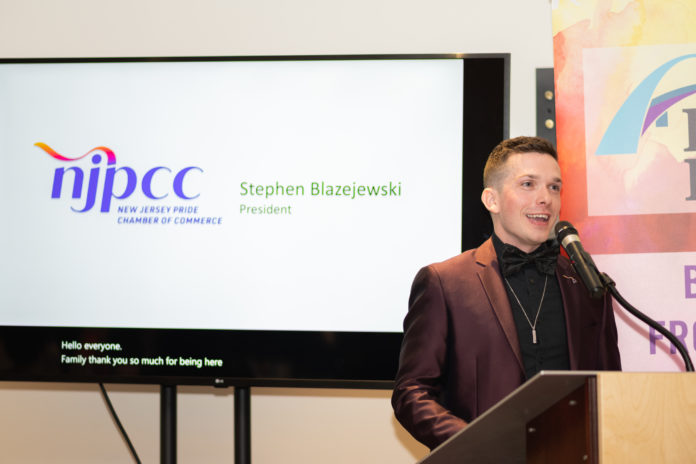 For the New Jersey Pride Chamber of Commerce, the biggest challenge at its first-ever end-of-the-year gala may have been deciding which number it wanted to promote the most.

Or is it simply 10, which is the number of years the chamber, rebranded as NJPCC at the start of the year, has been around.

NJPCC President Stephen Blazejewski said the totality of the year — and the current state of the chamber — was worthy of a grand celebration.

“The New Jersey Pride Chamber of Commerce that you see before you today is not the same chamber that was formed 10 years ago or even five years ago, when I first started,” he told the crowd at the MC Hotel in Montclair on Thursday night.

“What has stayed the same, though, is our commitment to advancing economic opportunity for the LGBTQ+ and allied business community throughout the Garden State.”

The LGBTQ+ community seemingly is under attack now as much as it ever has been. The event opened with a moment of silence for those lost in the recent senseless attack on an LGBTQ+ nightclub in Colorado Springs, Colorado.

And, while a same-sex marriage act was passed by Congress that repealed the Defense of Marriage Act, it’s not perfect, members said. They still have concerns.

That being said, the community talked of having a resolve to fight for its rights — something members vowed to do at the voting booth and with their checkbooks.

Peter Yacobellis, the executive director of Out Montclair and a council member in Montclair, said the steps taken in Montclair — there is now a 20% set-aside for minority groups when it comes to public spending — can be brought to any of the state’s other 563 municipalities.

“We can have a profound impact,” he told the crowd. “We talk a lot in this country about the power of our vote. And we all know how powerful and important our votes are, and have been, particularly in the last six years. But it’s also the power of our purchasing power.”

Yacobellis said the LGBTQ+ community needs to use its dollars to impact change in a way others have.

“If we care about climate change and want to fix those issues: We have to stop buying things that are bad for the planet, things that have palm oil and things that are sourced from countries with poor labor standards,” he said.

“If we care about the LGBTQ community and equality, we have to make sure we’re spending our dollars with companies and businesses that are friendly and supportive to the LGBT community.”

Be seen. Be heard. Make sure others know what you stand for — and what you’ll stand for.

The New Jersey Pride Chamber of Commerce announced that it is starting a foundation.

NJPCC President Stephen Blazejewski said the foundation will work to support LGBTQ+ students and business owners through a number of programs, scholarships and grants.

It was a message delivered repeatedly by an organization that is one of the fastest growing in the state.

Executive Director Gus Penaranda said the group has the potential to grow exponentially in 2023. He said this year’s events — including the group’s first-ever event at the League of Municipalities — show the potential reach of the group.

And the importance of reaching that group.

At his first event at the chamber, back in February, Penaranda challenged the audience to take a picture of the board and share it on social media. The goal, he said, was 10,000 impressions.

He repeated the ask Thursday night, but he increased the ask to the biggest number of the night.

How we pick the list: Simple question has complicated response