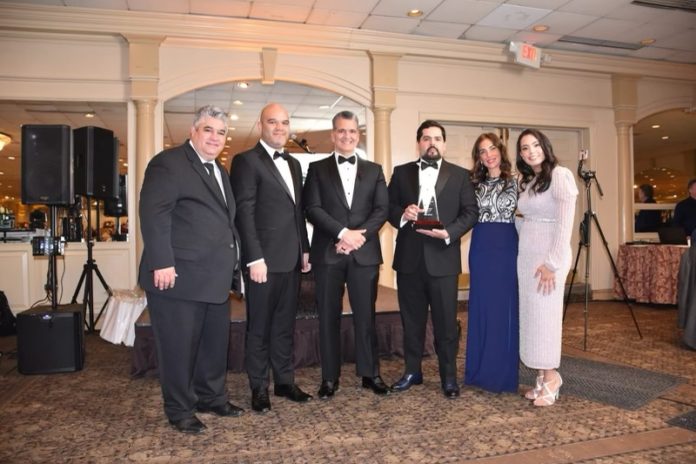 Alejandro Ferrer was gracious when talking about his journey from aspiring chef in Venezuela to successful business owner in New Jersey.

While he put in all the work and overcame all of the obstacles that only an immigrant entrepreneur truly can understand, Ferrer was quick to acknowledge the many others who helped him along the way.

As he accepted the prestigious Business of the Year award from the Statewide Hispanic Chamber of Commerce of New Jersey on Friday night, Ferrer — the head chef and CEO of Cavany Foods in Jersey City — offered tributes and thank-yous to numerous people, including the chamber itself, specifically noting the efforts of Chairman Luis De La Hoz and CEO Carlos Medina.

Ferrer benefited from the chamber’s Hispanic Entrepreneurship Training Program, better known as HETP, which — along with numerous other chamber initiatives and mentoring programs — has helped a generation of Hispanic businesses find their footing.

Many were among the nearly 500 in attendance at the Pines Manor in Edison for what always is the most raucous and spirited gala of the season.

But, don’t let the party fool you.

The Hispanic Chamber is about business — about using the power of the more than 120,000 businesses its members own and operate and the spending power of a community that is at least 20% (and likely closer to 25%) of the state’s population.

The Hispanic Chamber is about getting the benefits and opportunities that come when you represent a community that contributes $97 billion to the gross domestic product of the state.

Medina, who has been openly pushing for more Hispanic representation among boards and leadership at companies throughout the state, told the crowd his patience is starting to wear thin.

“I still struggle with the fact that there’s many well-known companies, some of which are here, that do not have any Hispanics on their board of directors. Jersey is 20% Hispanic; if you have a 10-member board, I expect you to have two Hispanics on your board. It’s just good business.”

Medina said the community’s spending power has punch — if it decides to use it.

“We’ve been telling folks, little by little, that it’s the right thing to do,” he said. “We’ve been mellow. We’ve been cool. But it’s going to start affecting your bottom line, because we’re going to start saying, ‘Do not shop with a corporation that doesn’t have anybody that looks like you on the board of directors, that doesn’t spend their procurement spend with people that look like you and don’t have a C-suite that look like you.”

In the meantime, the Hispanic Chamber will continue to do what it does as well as any chamber in the state or the country — support its members.

The success of Ferrer and Cavany Foods — and the thousands of businesses like it — are the reason why earlier this year the Hispanic Chamber was named best chamber in the country by the National Hispanic Chamber of Commerce for the second time in the past six years.

Ferrer said what he learned was invaluable.

An internationally trained chef, Ferrer specializes in bringing exquisite flavors to his dishes. He was just starting to build a business when the pandemic hit. Few sectors were hit as hard as the food and restaurant industry.

Ferrer, who had enrolled in HETP, used the lessons learned to pivot his business. He’s now open at 235 Grant St., offering organically prepared meals for pickup and delivery, catering and groceries, and a traditional dining experience.

He told his story to the crowd.

Ferrer said his “Familia” at the chamber helped him achieve his dreams — and did it just because they considered him Familia.

Ferrer said he was overwhelmed by their generosity.

“It’s hard for us to believe that a chamber can help somebody who (just came) to this country,” he said.

Ferrer pledged to pay it forward.

“This award is not something I’m going to put on a shelf,” he said. “This is a commitment to help immigrants like me who came to this country with a dream — and let them know that everything can be possible.”