Home Real Estate CentralReach was thrilled to return to Bell Works — and into a...
Facebook
Twitter
Linkedin 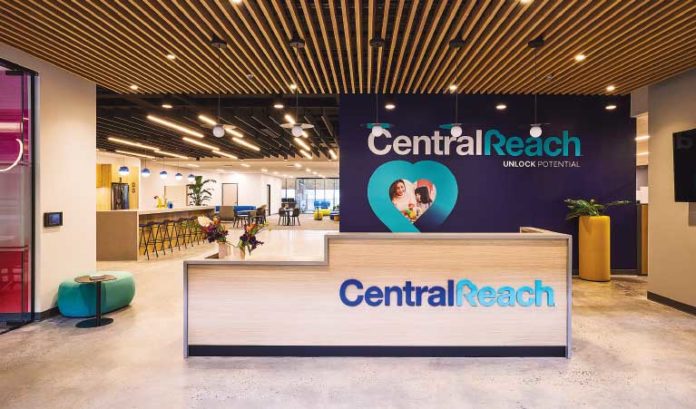 Chris Sullens, the CEO of CentralReach, can easily scale down the numbers.

The company, which produces software that assists those who help people on the autism spectrum, has approximately 400 employees nationwide, half of which always will be remote.

The other 200 or so will work out of company offices in South Florida or at Bell Works in Holmdel — essentially split equally, with each location serving approximately 100 employees.

Of the 100 or so that would call the Bell Works location their home office, only 25 or 30 will come in on any given day, Sullens said.

Given that: Why was Sullens so happy a few weeks back when he cut the ribbon on a new office space at Bell Works that is designed to serve more than 100 employees now, with the ability to easily expand to 150 later?

Simply put, Sullens has seen the numbers move quickly in the other direction, and he wants to be ready.

That’s why he came back to Bell Works (more on that in a minute) and why he was all-in on a magnificent workplace-of-the-future design created and built out by property owners Inspired by Somerset Development, G3 Architects and Paola Zamudio, the founder and head designer at npz studio+ and creative director at Bell Works.

The location is open, airy and well lit, featuring floor-to-ceiling windows, plenty of conference and huddle rooms, desks that can be both sitting and standing, open lounge areas for alternative work or meeting space and an open kitchen area.

And, of course, it all opens out to Bell Works, the you-have-to-see-it-to-believe-it metroburb that is every bit of the suburban city it bills itself to be.

Sullens has long been a fan of Bell Works.

CentralReach describes itself as the industry’s leading applied behavior analysis software and services provider that helps organizations serving individuals with autism and intellectual and development disabilities deliver evidence-based and personalized care, at scale.

CEO Chris Sullens describes it this way: “Our mission is to provide technology to the practitioners so that they can unlock the potential, improve the outcomes and help individuals who are on the autism spectrum with broader IDDs live more independent lives,” he said.

CentralReach mainly works with private practitioners now, but Sullens sees great opportunities to work with schools and those working with adults on the spectrum.

Sullens, who successfully ran WorkWave, another software provider, said the opportunity to continue in the Software-as-a-Service sector while providing a service that could have substantial impact on the lives of others, is a perfect work scenario.

“The ability to have business potential but do it in a place where you can have such a big impact on a community that needs it was great,” he said. “It was the first opportunity that came my way, and I quickly took it.”

He was one of its first occupants when he led WorkWave, which eventually was sold in the fall of 2017.

When Sullens was recruited to take over CentralReach in the summer of 2018 — back when the company had fewer than 100 employees, all based in Florida — he knew he wanted to get back into Bell Works, so he set up in coworking space at the metroburb.

Within months, the company needed more room, and took a 3,500-square-foot space that was pre-built. In early 2019, CentralReach took the pre-built space next to it, expanding to 7,000 square feet.

The company kept growing. As did the tenant roster at Bell Works. There was nowhere to expand to, so Sullens took CentralReach to a larger space in nearby Matawan in the summer of 2019.

He did so with the intention of returning.

“It was a sublease,” he said. “It was intended to be a temporary location. We didn’t move there to be there permanently.”

As it turns out, CentralReach wasn’t there much at all.

Soon after it moved in, the COVID-19 pandemic also moved into the state, pushing the company to an all-remote existence.

Ralph Zucker, the founder of what is now known as Inspired by Somerset Development and the visionary behind Bell Works, always has been a fan of Sullens.

When companies began heading back to the office — and a 25,000-square-foot space became available at Bell Works last fall — Zucker quickly reached out to Sullens.

Sullens said he was eager to get the call — one, he said, he was getting ready to make to Zucker.

The two quickly came to an arrangement, and then brought in Inspired, Zamudio and G3 Architects to build a space that reflected the needs of the company now and in the future.

The different functions of the company were put in different areas — each of which can be expanded without impacting the others.

“I think we could get 100-125 people in here comfortably now — and expand off of that,” Sullens said.

Each space stays true to the iconic architecture of the building as it matches modern needs and furniture with exposed walls and flooring.

“Creating the office of the future was a great project for me,” Zamudio said. “I love bringing innovative design ideas to all of my projects, from biophilic design to the psychology of color and spaces that have fluidity that encourage the users to collaborate, innovate and empower the modern worker.”

Zucker said the return of CentralReach to Bell Works was personally meaningful to him.

“It’s just an amazing vote of confidence for somebody to again say, ‘We really want to be here,’” he said.

Sullens said it was an easy decision.

“As I thought about where we wanted to build our office of the future, there really wasn’t another option,” he said.

“We do think of this as the office of the future. We put a lot of effort and energy into the design, from a post-COVID standpoint, so it would really suit our way of working.”

The renovation was completed in 8-9 months, and that included extra time needed for supply-chain issues. Sullens said a “true partnership” made a huge difference.

“I think Ralph, Paula, the architects and everybody in and around this building who partnered with us enabled us to consolidate the best practices that you see across all of the building and bring it to our space,” he said.

“I’m super excited about what we were able to do and proud that were able to provide a space that really does suit the way that we work today and will grow with us, and evolve with us, as we go forward.”

ON3, former Roche campus in Nutley/Clifton, takes another step toward completion