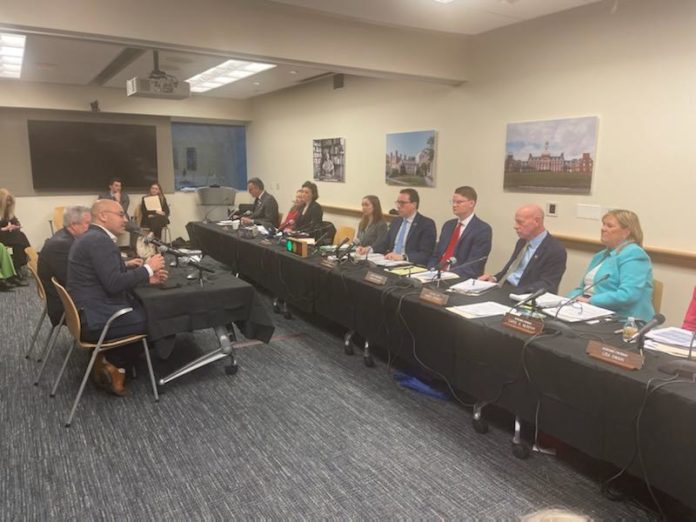 New Jersey should make the entire state a tax-free zone for startups. Oh, and it should increase the angel tax credit to 75%, from 25%.

That’s not the way Aaron Price, CEO of TechUnited: New Jersey sees it.

Price sees it as an aggressive — but smart — plan to help the state better compete with others to land innovative startup companies. He said as much last week, when he was invited to speak to the Assembly Science, Innovation and Technology Committee at the New Jersey Bioscience Center in North Brunswick regarding the future of innovation and startups in the state.

Price said the reaction to the move — and the attention it would create — makes the idea worthwhile.

“We need to do something so aggressive the Wall Street Journal highlights it and signals to angel investors across the country that New Jersey can’t be ignored,” he said.

Too often, the state is, he said.

A common measure of a state’s success in attracting startups and entrepreneurs is to review the value of venture capital received annually by in-state companies. Each year, there is about $300 billion invested in private companies by venture capital.

Price said about 80% of the capital is invested in companies from California, Boston and New York. The other 47 states fight for the remaining 20%.

Over the last few years, New Jersey has improved its ranking, moving from the high teens to the Top 10 in 2021. But, with so much more money out there and New York right next door, Price feels New Jersey must do more to attract innovation and growth.

That’s the impetus for the statewide tax-free zone.

“New Jersey should look across the water to the ‘Startup New York’ program, which makes certain locations in New York tax free for startups for 10 years,” he told the committee. “I believe, for New Jersey to be competitive with New York, we need to be orders of magnitude better so that we can’t be ignored.

“I propose we make the entire state of New Jersey a ‘Startup Zone.’ This will attract hundreds of serious startups and entrepreneurs.”

The payoff — or payback — will come down the line, Price said.

The Assembly Science, Innovation and Technology Committee was hosted by the chair, Assemblyman Chris Tully (D-Paramus).

TechUnited: New Jersey is a membership-driven, nonprofit organization with over 500,000 innovator members that offers opportunities for tech-enabled companies and entrepreneurs to propel the future of New Jersey and beyond through events, mentorship, content creation and more.

Founded in 1996 as the New Jersey Technology Council, the organization has established itself as the premiere advocate for the technology community in the region. In 2005, the NJTC helped start a successful venture fund in Tech Council Ventures.

Price thanked the group for the opportunity to share his thoughts.

“Thank you to Chairman Tully for an incredibly open and honest conversation regarding the future of innovation and startups in New Jersey,” he said. “The New Jersey innovation landscape has improved over the last few years, but I believe we can do much more to attract startups and entrepreneurs to our state. To do that, we must acknowledge our shortcomings and seek solutions.

“I thank the committee for their proactive hearing and their willingness to listen and engage with the speaker’s ideas of how we can make New Jersey an even more attractive state for startups and entrepreneurs.”

NuMSP expands into California with acquisition of Aperio IT