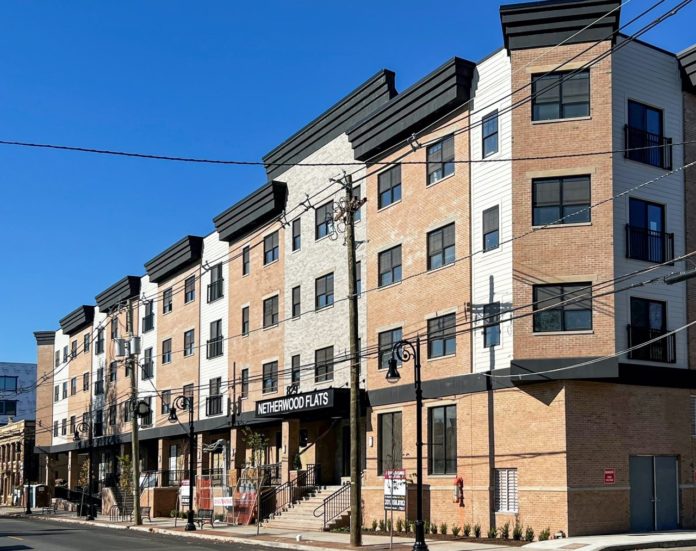 Plainfield-based Paramount Assets on Tuesday said construction near completion for Netherwood Flats, a mixed-use development in Plainfield and has begun preleasing ahead of the project’s New Year’s Day grand opening.

Netherwood is a transformative project for the city of Plainfield. Built on the location of a former used car dealership, the redevelopment project, at 829 South Ave., is a four-story, 128,000-square-foot transit-oriented building. The mixed-use development includes 70 oversized luxury apartments, 4,000 square feet of ground-floor retail space and an 84-space parking deck.

The development is a short 3-minute walk from Plainfield’s Netherwood New Jersey Transit train station and will offer its residents easy access to the Raritan Valley commuter rail line, traveling to Newark and New York City.

“Plainfield is at the leading edge of a revival that Netherwood Flats is helping to facilitate,” Rich Dunn, Paramount’s senior vice president, said. “Transit-oriented projects are very in-demand in suburban New Jersey and their success can revitalize an entire town. That’s what we are envisioning with Netherwood Flats — creating a lively community with luxury apartments and new retail shops for all residents in Plainfield.”

The Netherwood Flats community will include several on-site amenities to enhance residents’ lifestyles. The development includes a landscaped, elevated courtyard; a 1,500-square-foot fitness center; and a residents’ lounge. The property consists of one- and two-bedroom units ranging in size from 624 square feet to 1,427 square feet, with high-end finishes and stainless-steel appliances.

The first phase of Netherwood Flats will be available for occupancy in January, and the final phase will be completed in March 2023.