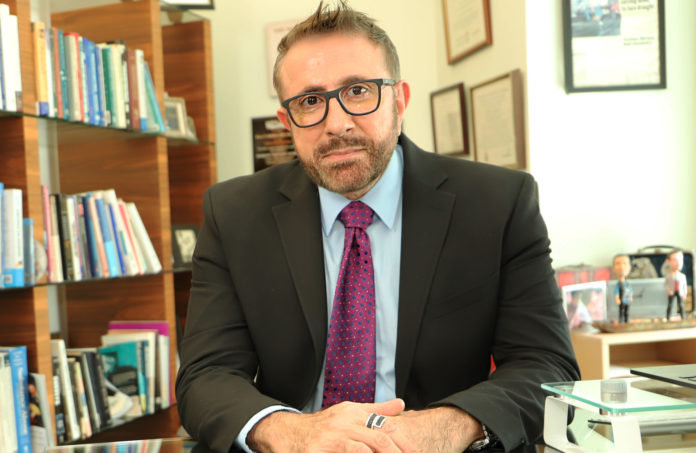 Dr. Perry Halkitis, the dean of the Rutgers School of Public Health, has as many qualifiers about the group’s decision to stop using Twitter as a pharma company has on its latest product:

Here’s what it’s about: Taking a stand against hate — and making a statement about the impact of hate on public health.

“It is very clear that we are a school that is rooted in social justice and health equity,” Halkitis said. “We are a school that believes that social and structural factors cause diseases and undermine health, which is nothing new in our ethos, or in our way we approach our work.

“This is not a decision we take lightly, or a decision that was made overnight. We have engaged in conversations for a while and debated it within our leadership team.

“We came to a conclusion that: How could we, as a School of Public Health that claims that racism and homophobia and misogyny and antisemitism are all factors that contribute to the undermining of health of people, take part in a platform that allows that to go on, free rein.”

Halkitis and the School of Public Health announced the decision to stop using Twitter on Monday afternoon. The school is not ending the relationship, he stressed, just suspending it.

👋 #RutgersSPH is leaving Twitter! As a school that espouses zero tolerance for harassment and discrimination, we’ve made the decision to leave. While our school’s account will remain a digital relic, we will no longer be active. Follow us on Instagram, Facebook and LinkedIn.

“We’re not terminating, we’re stepping back,” he said. “We don’t want to be off Twitter. But we’re not going to engage in Twitter in the manner that we had before, because we feel it is hypocritical to the values of the school.”

Halkitis said the School of Public Health has long debated its use of social media — and that it uses the platforms because it realizes they help it reach a key audience. The School of Public Health also will continue to use other social media platforms — platforms, Halkitis acknowledged, that also may have hateful posts. Hate speech, after all, is something that everyone agrees is impossible to root out.

Halkitis doesn’t feel the school’s decision on Twitter alone should be viewed as hypocritical.

The reason: Twitter no longer appears to be even trying to stop hate, Halkitis said.

“Twitter has a responsibility to the people of New Jersey and the people of the United States to ensure that people feel safe, and people’s health is not undermined,” he said. “And until such time that Twitter shows us that they are going to commit to some kind of enactment of policies, or whatever they’re going to do, that’s going to try to rein in what’s been going on over the last few weeks — which is this unbridled perpetuation of hate and haters — we’re going to just step back.

“And, when the time comes, and they’ve made some changes, we’ll be actively involved again.”

Halkitis also makes it clear that the decision is not a statement about Twitter’s new owner, billionaire Elon Musk, who Halkitis said does a lot of “really good things for public health” at his other companies.

“We’re not trying to penalize or villainize (him),” he said.

It’s hard to imagine a tougher task than trying to stop hate from anonymous people on the internet. Halkitis understands that. But the recent rise in such statements — and Halkitis said he measures it in the responses he gets to posts and media reports in general — made him essentially say, “Enough is enough.”

Judging the impact of the decision will be challenging — and require unique metrics.

The announcement on Tuesday about leaving Twitter was the School of Public Health’s first tweet since Dec. 1. The account had only 15 tweets in the month of November. For a platform that is estimated to have 350,000 tweets per minute, the account will not be missed.

Halkitis said the decision is about taking a stand.

“It’s like when the NCAA said, ‘We’re not going to North Carolina, because North Carolina has anti-LGBTQ laws that they’re trying to enact,’” he said. “Or, when companies say we’re going to counter the efforts in our state around abortion rights because we believe that women have a right to choose.

“Organizations are taking stands. And that’s all we’re doing here.”

He hopes — and thinks — others will join the Rutgers School of Public Health.

“When the news went out, I got a half-dozen to a dozen emails from other schools of public health leadership that said, ‘We’re having the same conversations and we’re trying to figure out what to do,’” Halkitis said. “I think we’ve enabled them.”

Halkitis said Rutgers School of Public Health is showing it is a national leader on public health.

“When I came to this university almost six years ago, somebody asked me what kind of school of public health I wanted to be like, and I said, ‘I don’t want to be like any of them — I want it to be new and interesting and innovative and modern and lead the way,” he said. “I’m really proud that we’re leading the way here.”

Halkitis said the school will continue to lead — whether it be taking a stand against other social media platforms or anything else it feels is harming public health.

That, he said, is what this is about.

“I’m not saying this is about Twitter,” he said. “I am saying that Twitter, in this particular moment, is allowing people who perpetuate hate, and who speak openly against people, to use their platform to spew their hate.

“And, in my good consciousness as a leader, I cannot allow our organization be connected to another organization that lets people like that be part of it.”