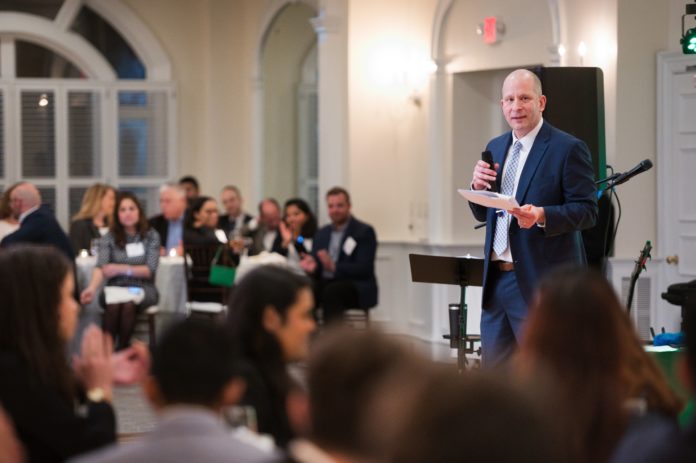 To invest in someone is a huge commitment. It shows dedication and a belief that, through resources and assistance, value will be increased.

The Rutgers Center for Real Estate invests in its students. It is committed to being the top real estate program in the country in terms of training its students and producing the most important and industry-relevant research. Since its inception in 2014, the center has awarded hundreds of thousands of dollars in scholarships to students enrolled in its programs. Last week, the center celebrated the 2022 round of scholarship winners, who in total were awarded more than $400,000.

The scholarship dinner at the Bernards Inn in Bernardsville was the center’s first in-person event since the pandemic. The evening brought together board members, donors, alumni and others in the commercial real estate sector to celebrate the scholarship program and its recipients, who were also in attendance.

Kicking off the evening was Ron Ladell, the newly selected chair of the Rutgers Center for Real Estate.

Ladell served on the center’s Executive Committee since its inception in 2014 — he is a Rutgers University senator, representing the Rutgers University Alumni Association. He succeeds co-Chairs Carl Goldberg and Jimmy Hanson, who have served in that role since the center’s founding, and have been a very important part of the program.

Support from Ladell and others in the industry is vital to the center, as they help set the academic courses, share their real-world experiences and provide students with networking and job opportunities.

Davis said the center’s philosophy about giving out scholarship dollars is that it is the right thing to do.

The center doesn’t just run itself. Davis not only highlighted the input from Hanson, Goldberg and Ladell, but he gave special props to Lori Layton, the director of marketing and outreach, who he said is instrumental to the viability of the program. He also gave thanks to numerous donors, who are the lifeline of the program, and who assist in its structure in various ways — everything from choosing the courses and instructors to building the advisory board and general advice along the way. Corporate sponsors of the program were also called out for their influence not only to the program, but to the industry. Davis thanked many others, as well, for their hard work and dedication to making the program a success.

In all, approximately 100 students were awarded scholarships at the dinner. To be eligible for an award, students must be enrolled in one of the center’s academic programs at either the undergraduate or MBA level. The Scholarship Committee reviews all applications using a “blind” selection process. For information on supporting the program, please contact Lori Layton.