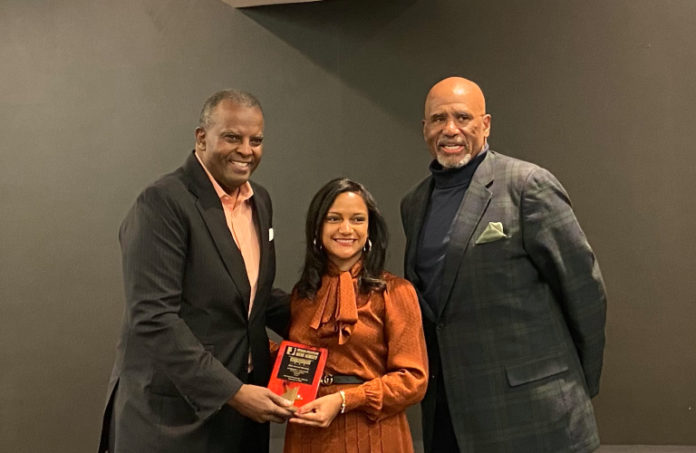 Economic prosperity — which starts with opportunity — always has been at the forefront of the mission of the African American Chamber of Commerce of New Jersey. But the chamber, under founder and CEO John Harmon, always has been about much more than that.

It’s about lifting the entire Black community in New Jersey, Harmon said, during the chamber’s annual meeting last week at the APA Hotel in Iselin.

That’s why it wasn’t a surprise to the group when Harmon told the group about one of its future plans, what he called its mobile academy.

“We are in the process of purchasing two vehicles that will go throughout the state of New Jersey and into your community to set up workshops around job readiness, financial literacy, homeownership and things like that,” he said. “We’re going to have a full menu.”

He joked: “For those who don’t want to come out, we’re going to come to your house.”

The chamber, which is closing on its membership drive goal of 150 new members, has never been stronger in terms of its revenue and programs — initiatives that serve the Black community in a number of ways.

Harmon was happy to rattle them off: A diversity, equity & inclusion initiative with the New Jersey Chamber of Commerce, a bonding program with the New Jersey Economic Development Authority, a small business certification readiness program with Public Service Enterprise Group and a Pro Bono Alliance with Gibbons P.C., which provides legal services to small businesses. Then, there are the efforts in cannabis and coding, leadership programs for youth and a job readiness training and development institute for those young and old.

As for events, in addition to the annual gala (Feb. 16) and the annual golf outing (in the summer), the chamber will sponsor its first-ever Black Business Expo, on June 15 at Montclair State University.

It also will be taking its award-winning TV show to the South Jersey market.

“We’re cover the full gamut, trying to get our community in a better place,” Harmon told the crowd.

It’s not an easy task.

Harmon, who prides himself on speaking the truth and speaking with facts, always acknowledges the current state of the community in New Jersey.

“There are 1.2 million Blacks in this state — and we reside largely on the liability side of the state’s balance sheet,” he said. “It’s important to note that, notwithstanding the talent that exists amongst the people represented here, there’s still gross underperformance and inequities throughout the state, from health care to education to wealth.”

The Black community in New Jersey has the highest poverty and unemployment, and the lowest percentage of homeownership and net worth — just $5,900 versus $315,000 for whites in New Jersey, Harmon said.

That’s why the chamber is taking such an all-encompassing approach.

And why, despite its recent run of success, Harmon always is appealing for more help, more sponsorships, more partnerships.

“Black people alone cannot mitigate these challenges — and we’d be fooling ourselves to think we can,” he told the group. “But, through the relationships with sponsors, and others who have the resources, have the opportunities and information, we can do transformational stuff in New Jersey.”

Harmon said the chamber is looking for allies throughout the business community to help it on its mission to get more Blacks in the C-suite and on boards — and to get companies to increase their procurement spends with Black-owned businesses.

The payoff goes both ways.

Kymberly Graham, vice president, diversity initiative of NeilsenIQ, a global marketing research firm that is one of the few that breaks the minority spend into specific minority categories (as well as overall people of color), came up from Atlanta to present a breakdown of the economic impact the Black community has in the U.S.

Graham said the economic spend of the Black community in the U.S. is $1.6 trillion — or big enough to be a Top 10 global economy in the world.

She also said people of color were responsible for 100% of the U.S. population growth in the last 10 years.

“Any business of any size that wants to grow has to have come to us,” she said. “We’re the people that will give you the numbers, the growth, the trajectory that you need for a successful business.”

“We’re trying to change minds and mindsets — and change the trajectory of who we are and what we are trying to do in New Jersey,” he said.

“All we’re saying, is give us a chance to prove that we can be better together.”

Kim: ‘I’ll never forget the feeling when I learned that my...