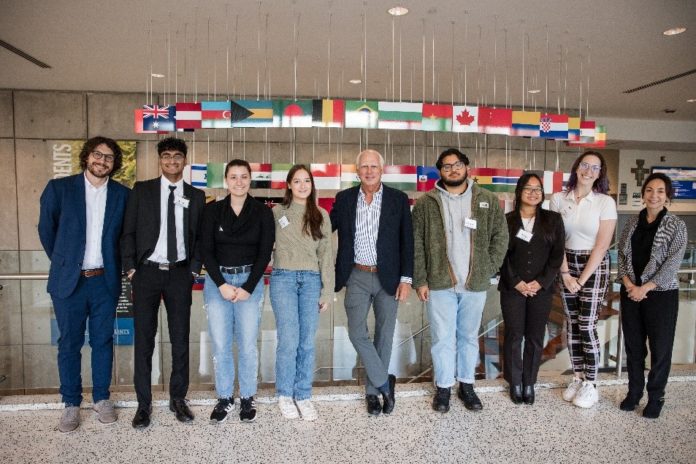 With a $1 million gift to Seton Hall University’s Office of International Programs and an additional $250,000 to help fund the upcoming construction of a student recreation center and athletics practice facility, Bruce Tomason will help the University realize its goals of increasing access for students to study abroad and will help the University complete the next step in its 10-year master plan to enhance facilities for all students and athletics programs.

Tomason, the co-founder and past executive chair of Velocity Clinical Research Inc. and managing partner of Summit Healthcare, knows firsthand how living abroad can spark an appreciation for cultivating a global mindset.

“Having served on the Board of Trustees and the Board of Regents for a total of 17 years, Bruce Tomason has been an invaluable voice in the evolution of University strategy,” University President Joseph Nyre stated. “His gifts validate our commitment to enhancing two of our top-priority areas: international programs and athletics. We are honored and grateful that he is investing in our students so generously.”

At a recent luncheon with students who will be travelling overseas next year, Tomason recounted how he spent five years of his career working and living in London. “Studying abroad helps students learn how to solve problems,” he noted. “And it opens their perspective on the human experience through the lens of different cultures. It also gives graduates an edge in the job search.”

Tomason, a Seton Hall alumnus, earned his B.A. in economics from the South Orange school, but said his Seton Hall story is not atypical: a 2nd-generation American born of blue-collar parents and a first-generation college student, Tomason chose Seton Hall because he was familiar with the name, having followed the men’s basketball team since he was in 3rd grade.

“Seton Hall was a natural for me,” said Tomason. “Several members of my family attended Seton Hall and that influenced my choice.”

Tomason was led to a career in managing and investing in various healthcare and clinical-research businesses. He has held senior executive roles in a wide range of companies, such as Evans Medical Ltd., Alterna LLC, One Call Medical, Inc., Copernicus Group, IRB, and several more in addition to Velocity Clinical Research, Inc.

His job at a British pharmaceutical company brought him, his late wife Carol, and their two young daughters to live in London from 1986 to 1990: an experience that transformed his life. “When my wife and I first got married, our dream was to spend three weeks in Europe,” said Tomason. “Little did we know we’d spend five years there and form lifelong friends.” They travelled extensively while living in Europe, reaching as far as Egypt and what was then the Soviet Union.

Witnessing his daughters’ experience of robust study abroad programs at other universities led Tomason and Carol to set up a scholarship at Seton Hall in 2007 to give more students access to international experiences.

Now, 15 years later, Tomason has decided to make an even more meaningful gift. “I am committed to what the University represents and what it does for students—particularly for first-generation students like myself, who have an opportunity to go to college,” said Tomason. “That experience in itself—apart from the international experiences—changes the trajectory of people’s lives. I’m a good example of it.”

***
Closer to home, Tomason understands that the Seton Hall University brand benefits tremendously from the success of its Division-I athletics program. “It gives us tremendous exposure and name recognition,” he said, “When you play nationally recognized teams, whether it’s men’s basketball, women’s basketball, soccer, golf, or another sport, you play against elite teams and those who are watching mentally put you in that category.”

The new practice facility will involve a remodeling and extension of the Richie Regan Recreation & Athletic Center on the South Orange campus. It is the latest step in a long-range plan to enhance athletics and recreational facilities for the entire Seton Hall community.