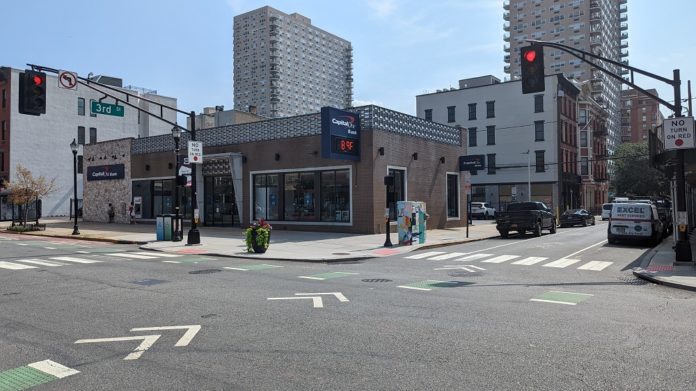 “Due to our relationships with the buyer as well as the seller, we were able to bring all the parties together and facilitate the sale of this highly sought-after retail property,” Mackowski said.

Mackowski is one of New Jersey’s premier Gold Coast retail brokers, with a transaction record that includes arranging over 55 transactions and 140,000 square feet of both leases and sales within Hoboken and Jersey City alone.

Owned by Capital One, the eight contiguous lots and 0.33 acres that comprise 301 Washington St. has made it the most in-demand corner within Hoboken’s prestigious business district. Retail block co-tenants include Lululemon, Athleta, Sephora, Starbucks and Panera Bread — a rare amenity in a high-population-density municipality where the total land mass is 1.25 square miles, according to Mackowski.

Pierson’s deep Hudson County retail market knowledge, as well as the property’s inherent repositioning potential, served as the springboard for arranging the sale of 301 Washington St., where the former occupant was a Capital One Bank branch.

“Many investors have had their eye on this particular redevelopment opportunity due to the uniqueness of having over 145 feet of contiguous frontage along Washington Street — a rare-to-market opportunity that currently cannot be found anywhere else on the street,” Mackowski said. “Adding in the prominent corner location, high-foot traffic and identity at the heart of Hoboken’s thriving business district, made this opportunity especially appealing. It was the right time, the right buyer and the right property, which was a win-win for one and all.”