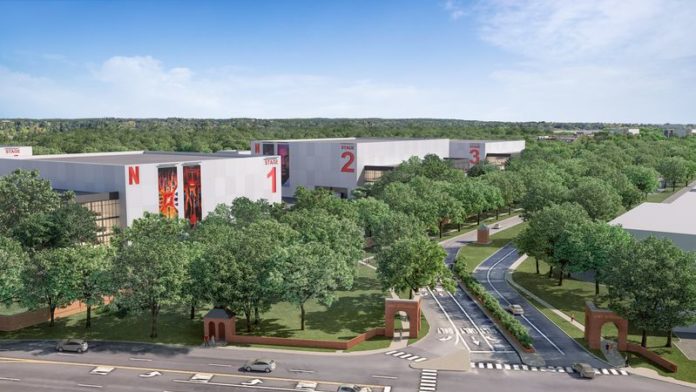 Netflix on Wednesday received approval of its plans to develop a state-of-the-art East Coast production facility on the former Fort Monmouth campus in Monmouth County that will create more than 1,500 permanent production jobs and more than 3,500 construction-related jobs in New Jersey.

The announcement follows the authorization by the Board of the Fort Monmouth Economic Revitalization Authority (FMERA) of a Purchase and Sale & Redevelopment Agreement with Netflix for the property that has been largely vacant since 2011. The Board approved the decision at FMERA’s Dec. 21st board meeting.

Netflix disclosed the bid amount on Wednesday as $55 million and plans to commit an additional $848 million to develop the more than 292-acre parcel, adjacent to Route 35 in Eatontown and Oceanport, into 12 state-of-the-art soundstages totaling nearly 500,000 square feet of new development, with the remainder of the property slated for redevelopment with supporting film uses and several community amenities.

“This transformative investment will serve as a cornerstone in our efforts to create a thriving industry from whole cloth,” Gov. Phil Murphy said. “As a result of nearly a billion dollars in film production spending, New Jersey will further solidify its status as an emerging national leader in the television and film industries. Additionally, Netflix’s substantial direct investment will stimulate job creation and spark an entirely new ecosystem of housing, hotels, and ancillary businesses and services, bringing with it countless additional jobs and boosting the regional economy.”

Murphy has vowed since the beginning of his Administration that building New Jersey’s film and television industry has been a top priority.

“It is so exciting that our state has just added another force to its ranks with the addition of Netflix’s production facility at Fort Monmouth,” said First Lady Tammy Murphy.

“We’re thrilled to continue and expand our significant investment in New Jersey and North America. We believe a Netflix studio can boost the local and state economy with thousands of new jobs and billions in economic output, while sparking a vibrant production ecosystem in New Jersey,” Ted Sarandos, Netflix Co-CEO and chief content officer stated.

Additional and ancillary improvements may include office space, production services buildings, mill space, and studio backlots, among other uses customary to the film industry, with the potential for consumer-facing components, such as retail and consumer experiences.

“Netflix’s decision to make a major investment in New Jersey is crystal clear evidence that Gov. Murphy’s commitment to building a thriving film and television industry in New Jersey is working. New Jersey is the birthplace of film, and under Governor Murphy’s leadership our state continues to be a place where production companies thrive,” NJEDA Chief Executive Officer Tim Sullivan said. “This project marks an extraordinary next chapter in the redevelopment of Fort Monmouth following the devastating closure of the base in 2011.”

Netflix confirmed in October that it had been selected as the “preferred choice” among four bidders competing for the parcel of land at the former U.S. Army base. Netflix received the top evaluation score. The deal now enters a due diligence period and local approvals process before being finalized.

Under the terms of the agreement, Netflix will pay $55 million for the parcel, including a utility contribution of $5 million and the FMERA office relocation fee of $3 million, per the terms of the Request for Offers to Purchase issued by FMERA on March 8, 2022 with a deadline of June 6, 2022.

“Our team is incredibly passionate about Fort Monmouth’s revitalization and is committed to surpassing the Fort’s prior role as a major economic driver in the region,” said FMERA Executive Director Kara Kopach. “A project of this scale has the potential not only to create thousands of jobs but will also result in significant investment on the Fort and spur local development in support of the project. The magnitude of Netflix’s investment is an absolute windfall for our stakeholders and the State of New Jersey. We’re eager to see this project come to fruition.”

The parcel that will be developed by Netflix contains former residential, administrative, and R&D buildings, warehouses, workshops and additional general-purpose facilities in the Boroughs of Eatontown and Oceanport, within the Main Post section of Fort Monmouth. It is located adjacent to State Route 35, providing easy access to the Garden State Parkway, Route 18, NJ Transit Bus Lines and County Route 11 (Oceanport Avenue), which provides direct access to the Little Silver NJ Transit Train Station.

“New Jersey was the birthplace of the modern film industry, so we’re glad Netflix is helping to bring it back to its roots with this major investment in people and production facilities here in Monmouth County,” Senator Declan O’Scanlon said.

“We are excited about this announcement and the economic opportunities both in the construction and operations of Netflix. It will be a great economic engine for the citizens and taxpayers of central New Jersey for jobs and economic growth,” said Wyatt Earp, president, Monmouth and Ocean Counties AFL-CIO.

“Netflix’s arrival in the State of New Jersey is a boon for the hard-working men and women of the Building Trades. Together, we’ll build studios and sets that will rival the world and show exactly what New Jersey has to offer,” William Mullen, president of the New Jersey Building & Construction Trades Council said.