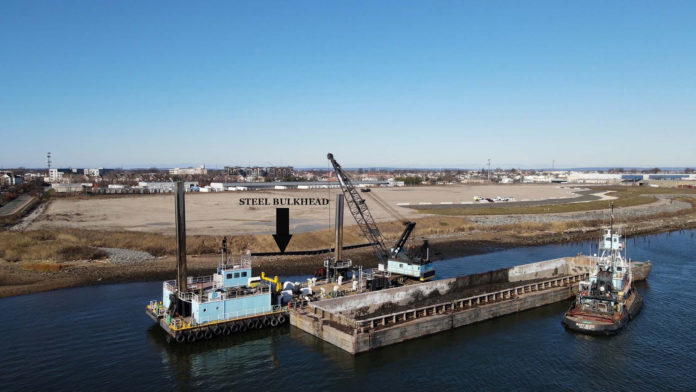 Carteret Mayor Daniel Reiman on Wednesday announced that the borough has taken major steps forward in constructing its long-planned ferry terminal with the completion of Phase 1 and the beginning of Phase 2 for the game-changing, state-of-the-art transportation project.

Phase 1 included the installation of approximately 130 linear feet of steel sheet pile bulkhead along the Arthur Kill waterfront that will be home to the future ferry terminal landing.

The $473,258 contract was awarded to Agate Construction of Clermont in June. Work began and was completed in November of this year.

The next phase of the ferry terminal includes dredging the waterside of the bulkhead to achieve sufficient depths for the ferry slips and docking area. At a cost of approximately $2.5 million, this work includes 19,500 cubic feet of dredging and is overseen by the state Department of Transportation Office of Maritime Resources. The borough received full funding for these phases of the project last year from the NJDOT Transportation Capital Trust Fund.

“These are the first steps in what will be a spectacular transportation project on a constantly evolving waterfront,” Reiman said. “Eventually, there will be restaurants, bars, retail shops, a movie production studio and office space that will help to transform our once entirely industrial waterfront into a work-eat-play destination.”

The borough and NJDOT are currently finalizing bid documents for the next two phases, Reiman said, which is the construction of waterside improvements and upland site work.

Waterside improvements will include docking and slips. The site improvements will include a 700-space parking lot, is anticipated to break ground in 2023, and immediately will be followed by a 20-foot-wide elevated pedestrian boardwalk connecting the parking lot and the ferry loading area. The boardwalk is expected to be completed in 2024, Reiman said.

Additionally, the borough is in final design for an intermodal transportation building, which will host a ticket office, restrooms, bar, lounge, office space, restaurants and retail.

“Carteret is quickly becoming one of the most desired locations for commuters to call home,” Reiman said. “New residential and commercial opportunities, combined with our future ferry service, newly constructed Performing Arts and Events Center, upgraded parks and stable tax rates solidify Carteret as a great place to live, work and raise a family.”

The Reiman administration has brought in an additional $37 million in grants from the federal and state government toward the Carteret Ferry project, including:

The Carteret Ferry Terminal is part of Reiman’s vision to turn Carteret’s once-inaccessible, completely industrial waterfront into a popular regional destination. The waterfront now includes a fishing pier, a public park, a mini golf course, a 185-slip marina, a future events center and a recent expansion of a Riverwalk that soon will open.

The seven-acre site of the ferry terminal is on a former industrial property north of Waterfront Park, the balance of which the borough will obtain to develop a movie studio, hotel and more.

“Like so many of these projects that we plan in Carteret, these are game changers,” Reiman said. “They create jobs, put people to work, pay significant taxes and (provide) significant economic benefits to the community. They continue to change and improve the community.”