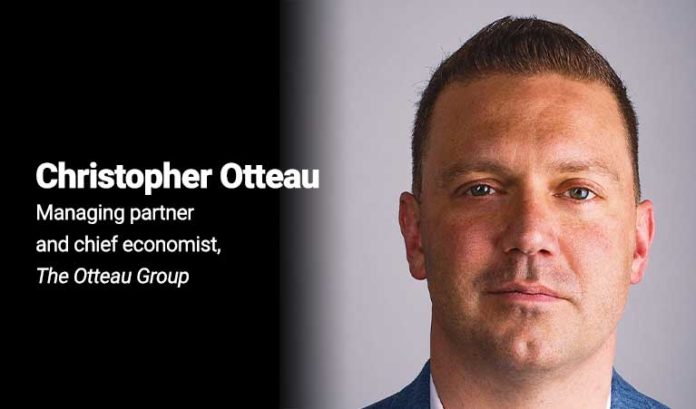 Christopher Otteau remembers the early years — how the upstairs of the office of the Otteau Group sometimes doubled as a playroom.

He fondly recalls going to networking and business events with his dad, company founder Jeffrey Otteau, when he was just 9 or 10.

And he eagerly tells the story of how he knew from an early age that the family business — long considered a top consultant in the state for real estate valuation and analysis — was for him.

The best memory, however, may be the time he got fired. By his father.

Christopher Otteau jokes about it now, but it was no laughing matter then.

“My father fired me,” he said. “He terminated me over the summer one year because I showed up late to work for the second day in a row.”

The worst part: Christopher Otteau, then 15, had to go home and tell his mother.

You can see where this is going. Mom quickly called dad.

“He said: ‘You can’t show up late to work — it sets a bad example. I don’t let anyone else do it,’” Christopher Otteau remembers him saying.

He also remembers begging his dad for a second chance. Jeffrey Otteau relented. The lesson, however, was learned.

“I can tell you, I’ve never been late again,’” Christopher Otteau said.

Bringing Christopher Otteau back has proved to be a wise decision. The family business is rolling.

Hudson Atlantic, the brokerage service for property owners, investors and developers of commercial real estate that the Otteaus founded with Adam Zweibel last summer, is going well — as is the suite of offerings the Otteau Group always has had.

Valuation, advisory, research, dispute and litigation support and a variety of other offerings make the Otteau Group a recession-proof business, Christopher Otteau said.

“These are the times our business really thrives because we’re so diverse in our offerings of our products and services,” he said.

ROI-NJ was eager to hear more about the Otteau Group’s efforts — and more about the father-son dynamic. So, we invited Christopher Otteau, now 43, to be a part of our annual Interview Issue. Here’s a look at the conversation, edited for space and clarity.

ROI-NJ: Let’s start with the business. You say the firm does better in tougher economic times — why is that?

Christopher Otteau: Most of our competitors are just bank appraisers or they just do litigation support. We do market feasibility studies; we do return analysis for investors on projects; we do yield analysis — we do everything. And, when the market is questionable, they want our services more.

When the market is great, some developers think, ‘I can build anything, I don’t need anybody’s opinion.’ And, sometimes, they’re right. But, in a bad economy or a questionable economy, or when they’re going into tertiary markets, we do a lot of work.

And we have a lot of government contracts. We work for a lot of cities and municipalities, assisting with their planning department, helping construct pilots, those kinds of things. So, we’re never really that affected by recessions. We’re always stable or growing.

ROI: Part of that growth is Hudson Atlantic, a brokerage service that was founded in 2021. Talk about the opportunities and challenges that business unit presented?

CO: Before we had Hudson Atlantic, we had Otteau Realty Advisors. That’s where we hung our brokerage license — and we did a handful of deals each year. Everybody comes to us and says: ‘What do I do with this piece of property? What is my property worth? How much should I sell it for?’ The logical transition to that is, ‘Why don’t we sell it for you?’

That’s why we brought on Adam Zweibel. He’s been a good friend of mine for probably 10 years. We’ve closed a lot of deals together over the years and I just love his work ethic — how he closed deals, how his customers liked him.

This was always a sensitive area for us, because we have a very good relationship with the brokerage community. They bring us into their deals; they recommend us. So, we were unsure how it would work out being a competitor. But, we ended up really shifting into deals that weren’t really in competition with them.

ROI: Let’s talk about the variety of work that the Otteau Group does. Everyone has seen you speak on panels and seen your analysis in publications (including ROI-NJ), but I’m not sure everyone knows how in-demand your analysis is. What can you tell us?

CO: We advise many banks in New Jersey; it’s another service that we offer. We help them understand where their portfolio is at, what loans could be in trouble — we have a stress-testing model. Typically, we’ll go in once a quarter and speak to their board and advise them of what we see coming, what areas to stay away from and what areas they should be concentrating on lending in.

Earlier this month, a large group of South Korean investors, along with their government officials, wanted a meeting with me to be able to give them a forecast of how their investments are going to perform, in New York City and Jersey City.

And then, there are times when I will do a full appraisal, underwriting educational seminar for our clients as part of our package services.

ROI: OK, let’s get to the good stuff. What was it like when you officially joined the business? Based on the firing, we’re guessing your father did not go easy on you?

CO: My dad instilled a very hard work ethic in me. So, I was always working through high school and college. In 2001, when I really came on full-time, he put me in the lowest-level position in the company. I was the janitor and had to clean the office. His opinion was, ‘I started cleaning my own office, so that’s where you’re going to start.’

I worked my way up through every position in the company. And he never held different rules for me than for other people. In fact, he always was harder.

You can always tell who the coach’s son is out there, because he’s the one that gets beat up the most by the coach. And he coached every baseball team I was ever on until high school.

ROI: Some people would have struggled to with this. We’re guessing you’ve been hearing about the ‘big shoes’ you have to fill for some time. Has that been an issue for you?

CO: I’ve heard that term a lot, big shoes to fill, but I think it’s pushed me. To get more education, to become a professor (he teaches at the real estate school at Monmouth University), because that’s something he never did.

Working together has been really great. I’ve always said, together — me and him, side by side — we’re even greater. We complement each other and we go back and forth on a daily basis on strategy and growth and all sorts of things.

ROI: Speaking of growth, talk about the future of the firm, which is now up to 30 employees between both companies.

CO: We’ve always grown, but the past two years have been more significant growth. We’re different than our competition in many ways. Every year, we look at every product we offer, and we say: ‘How do we change it? How do we enhance it? How do we make it better?’

We’re constantly enhancing what we do, rather than just going with the status quo, and it really makes a difference to your clients. So, we’ve definitely captured more than the typical market share because of our attention to quality.

ROI: One last thing. The Otteau Group is a family business in more ways than one. We know you give your wife, Allison Otteau, a lot of credit. Talk about her impact?

CO: I would never be able to be as successful as I am without her doing what she does. She takes care of our kids and everything else throughout the day. It’s hard what she goes through every single day. But, she allows me to be able to work as many hours as I need to. She’s really my rock.

The best ideas come from your employees, because, then, the idea is more accepted, they take ownership of it and they feel pride in it. I try to use that technique with my kids. I’ll tell my son, you can either do all your homework now and then have this many hours of Xbox over the next week. Or you can do your homework in the morning and maybe you’ll only get 10 minutes, whatever you want. I’ll let him choose, make him think it’s his own idea. This makes my kids feel like they’re in control.

What person, dead or alive, real or created, famous or infamous, would you want to have dinner with?

If I had the opportunity to have dinner with anybody, I would have dinner with my (paternal) grandfather. He was such a mentor to me, just one of the best people I’ve ever met in my life. I named my son after him. We lost him very early in life (at age 69). And that was a long time ago.

If you could be New Jersey business czar for the day, what would you do to help the state?

One of the most important parts to how our economy survives is employment. I’ve always wished that, during hard times, times like now, if they said, ‘We’ll give you a reprieve on taxes for any employee that you hire over the next six months.’ Even if it were just for 5 years, that would spur so much job growth. Businesses like ours pay a lot of taxes. If we knew that we would be able to hire people now and we’re going to get a tax break for doing it, I would hire them now.

What’s your favorite food? It can be a meal or a snack — or even a restaurant.

That’s easy: My favorite dish that my wife makes for me: linguini with white clam sauce.

Why one top N.J. business leader feels every day should be...